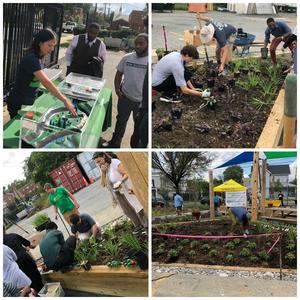 The RiverSmart Schools project will improve the health of the Anacostia River and the community in addition to providing educational opportunities for IDEA.
When the IDEA community got down in the dirt to finish planting a new garden behind the school containing more than 1,000 native plants and trees, it was a major milestone in a project that began two years ago, but it's just the beginning of exciting growth to come.
RiverSmart Schools, an initiative of the DC Department of Energy and the Environment, sponsored the creation of the garden after IDEA applied to become a RiverSmart School. Nonprofit Casey Trees supplied the plants and trees along with experts to guide volunteers in how and where to plant them. Natural Resources Design, under the leadership of Lauren Wheeler, served as designer and general contractor for the project.
The garden will help improve the health of the Anacostia River and the Anacostia and Potomac Watersheds by alleviating storm runoff from the neighborhood that typically flows into the river, bringing with it pollutants. Instead, the garden will absorb and divert that water.
Pollinators--many of which have decreased dangerously in numbers in recent years, threatening our country's food supply--will have another source of plants from which to derive pollen, which helps our region to grow produce. IDEA's own Beekeeping Club has hives on the school roof whose bees have been struggling to make honey. We also maintain fruit, vegetable, and herb gardens outside in greenhouses and raised beds--constructed by our own Academy of Construction and Design scholars--that will benefit from pollination.
Not only will the garden benefit the local community and the broader environment, but it will also serve as an evolving living classroom that IDEA scholars and staff can use to study biology, environmental science, ecology, and more. And as the trees and plants mature, the garden will simply provide shade and a leafy green oasis in the middle of a city block.
Published October 17, 2018 Print