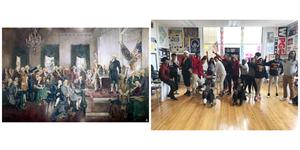 Mr. Stevens' class adds new twist on historical event.
Recently IDEA history scholars had the chance to reenact the Constitutional Convention. Similar to the original Constitutional Convention in 1787, individuals debated, compromised, and then built alliances in an attempt to create a Constitution for the new country. However, unlike the original convention, at our Constitutional Convention of 2018, we invited women, Native Americans, indentured servants, and both free and enslaved African Americans to participate. Scholars spent one week getting into character by researching, writing speeches, building alliances, and developing resolutions as one of these "role playahs."  On Tuesday they used Robert's Rules of Order as a format to participate in our Constitution Convention of 2018. They did awesome. Scholars stayed in character, used historical arguments, and enthusiastically participated! I am pleased to announce that after 60 minutes, they managed to expand suffrage to Native Americans, indentured servants, and African Americans, end the slave trade, and, eventually, abolish slavery.
~Bill Stevens, social studies teacher
Published October 11, 2018 Print