Sgt. Bee Retires After 17 Years of Service to IDEA 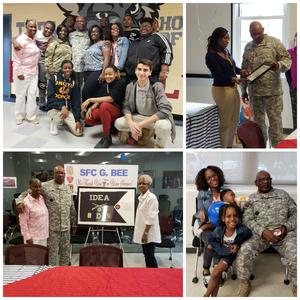 The JROTC instructor was celebrated yesterday by staff and scholars.

Sgt. George Bee, who is retiring at the end of this school year, came to IDEA in 2001 after working as a JROTC instructor in Baltimore. His goal as a JROTC instructor has simply been to help kids and prepare them for opportunities in life. Cadets in JROTC learn how to dress appropriately, lead others, and communicate with their peers, especially in new situations such as JROTC summer camp or drill competitions. Sgt. Bee will miss the scholars and staff at IDEA. “It was a good run,” he said.

Sgt. Bee joined the US Army in 1975, after completing a year of college on a football scholarship, deciding he wanted a greater challenge. Sgt. Bee enlisted in the military as an infantryman but switched to medical logistics in 1979. During his 22 years of active duty service, Sgt. Bee was stationed in Germany, Korea, Iraq, Afghanistan, Honduras, and Bosnia, among other locations.

Thank you for your dedication to our cadet scholars, Sgt. Bee! We wish you the best.