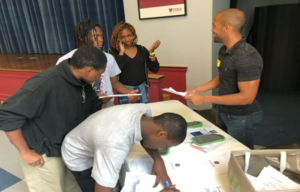 The company, which already partners with IDEA, is excited to recruit scholars for positions.

At our recent Workforce Friday, a representative from Yondr talked with IDEA scholars about summer and fall job opportunities with the company. Scholars were already familiar with Yondr pouches, because they put their own cell phones in them every morning when they arrive at IDEA. The pouches lock so scholars aren't tempted to use their phones during the day, but are assured of their safety. Then at the end of the day, scholars unlock their phones at an unlocking station run by IDEA staff.

Yondr is hiring young people to work at special events throughout the DMV to distribute and unlock Yondr pouches so audience members can focus on enjoying the performances. The pay for Yondr employees is $20/hour.