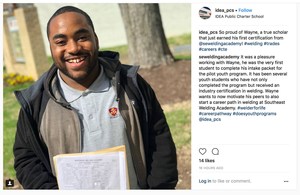 With a welder certification, a paid internship at CVS, and two college acceptances, Wayne Powell is excited about his options for the future.

IDEA senior Wayne Powell hasn’t yet graduated from high school, but he has already made great strides into the working world, and he isn’t about to slow down.

This spring Wayne earned his welder certificate from Southeast Welding Academy, after completing a six-month training program. “It was hard at first trying to get those skills,” he explained. “My instructor would come into my booth and say, ‘Just keep working.’ When I got it, it was a relief.” Welding was appealing to Wayne because he considers himself a “hands-on guy” who enjoys creating and repairing rather than sitting at a desk or working on a computer. Wayne’s welder certificate means he will earn a wage of at least $27/hour for welding jobs he takes now. He plans to continue his training, however, and increasing his earning potential. Wayne was recently asked back by his instructor at the Welding Academy to return to the Academy to help mentor new students.

Wayne received acceptances from Prince George’s Community College and Montgomery College, and plans to earn an associate’s or bachelor’s degree while working, in order to become a welder instructor. He hopes to take as many hands-on courses as he can find, to broaden his skills to include HVAC, plumbing, and other trades that will serve him well throughout his career.

Meanwhile, Wayne just started a two-month paid internship with CVS, working after school as a stocker. He was hired for the internship because of his participation in the DC3C Spring Break program, which provided Wayne and three of his IDEA classmates with valuable job training skills and opportunities to connect with local employers.

Wayne’s hard work and determination is especially remarkable given a recent family tragedy. Wayne had lived with his father—just the two of them—since he was five years old. This past winter, Wayne’s father went to the hospital with pneumonia and died there from cardiac arrest. Wayne is now living with his older sister, working to save money for his own apartment. He is also the proud father of 10-month-old Keniah, who is learning to walk. “Because I have a daughter, I have to keep pushing, I have to have options in life to support her.”

This year was Wayne’s first at IDEA, and he appreciates the support he’s received here. “There are lots of benefits and programs and opportunities that I’ve taken advantage of and that helped me,” he said. “Ms. Briscoe has helped me in tremendous ways—finding these programs, filling out college applications, helping me get community service hours. Mr. Thornton has pushed me to keep me on the right track, make sure my grades are good, and I’m where I need to be.

Out of all the schools I’ve been to, I’ve worked the hardest here. The teachers are different—they actually teach and don’t let you get out of anything. You have to turn everything in and complete your assignments. This is the hardest school I’ve ever been to.”

The rigorous classes have pushed Wayne to succeed in ways he never thought possible before. He is pleased to have academic and career options open to him now, thanks to the support of IDEA staff. IDEA is proud of Wayne’s hard work and achievements.