Academy of Construction and Design Celebrates Scholars and Partners 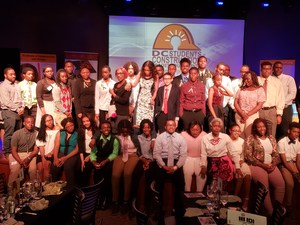 Construction industry leaders and IDEA scholars, staff, and supporters met for lunch at The Hamilton restaurant in DC on May 4, celebrating a stellar school year at the DC Students Construction Trades Foundation’s annual Meet the Future event.

Chairman of the luncheon was Todd Stokes, managing partner of the DC Metro office of Baker Tilly, an accounting and advisory firm that works closely with construction companies. DC Councilwoman Brianne Nadeau attended the event. Attendees enjoyed a video about ACAD scholars’ trip to build a school in Jamaica in February, and a video featuring ACAD scholars dressed as tool-wielding superheroes explaining how their construction skills give them real-life super powers.

Rock Newman, host of the Rock Newman Show on PBS affiliate WHUT-TV, and former manager of heavyweight boxing champion Riddick Bowe, was the featured speaker of the afternoon. Newman told scholars in attendance that they should not only complete their education so they can make a living wage, but that they should prepare themselves to own their own businesses and become CEOs. Newman cited Muhammed Ali as the inspiration for his own success. “Ali made me believe against all odds, if you can believe it, you can achieve it,” he said. Asking scholars to stand and repeat after him, Newman invoked, “I will dare to dream. I will commit myself to a great education. I will commit myself to work hard to achieve my dream. I will build great futures.”

Miller & Long Co. Chairman John McMahon, who serves as president of the DC Students Construction Trades Foundation, spoke of the need for vocational education in public schools and the value that programs such as IDEA’s Academy of Construction and Design offer for the scholars that participate in them and the employers who eventually hire those scholars, as well as the community as a whole. “We are looking for people who work with their hands and their brains. It’s not an easy business,” he explained.

Michael and Gerald Sigal of GCS | Sigal were on hand to present the Sigal Scholar Awards to four IDEA scholars. The awards went to

Chief Operating Officer and Executive Vice President of the IDI Group Companies Norman Dreyfuss introduced the Norman Dreyfuss Scholarship Awards, which he endowed a decade ago after attending the Meet the Future Luncheon as a guest. “I’m happy to be able to let these students that really have great aspirations achieve their goals,” Dreyfuss said. “When I went to school I went to night school and law school, and working was the only way I could pay for it. When I got a scholarship, it was one semester I didn’t have to work. The ability to give that back is really important to me.” Dreyfuss Scholarships are awarded to graduating seniors. The second-place winner this year was Mehki McClam, and the top prize winner in the Dreyfuss Scholarship Competition was Richard Boller.

Special recognition was given to Carol Randolph, former chief operating officer of the DC Students Construction Trades Foundation and co-founder of the Academy of Construction and Design. Randolph, who recently retired but has continued to play an active role in planning the Meet the Future luncheon, received a framed photograph of Dr. Martin Luther King Jr.’s speech from the 1963 March on Washington. John McMahon quoted Dr. King’s famous words that “everybody should be judged by content of their character, and of all the people I know nobody has talked the talk and walked the walk more than Carol. This magnificent woman has been a godsend to this program.”

The event concluded with a ceremony in which Academy of Construction and Design and JROTC scholars processed onto the stage for a candlelight ceremony to symbolize passing the torch of learning to the scholars who will follow them.

Congratulations to all of our Academy of Construction and Design scholars and staff for their hard work and special thanks to our partners at DC Students Construction Trades Foundation and all of its sponsors and training partners who make these awards and scholarships possible.