Scholars Meet with DC Council Members to Advocate for DC3C 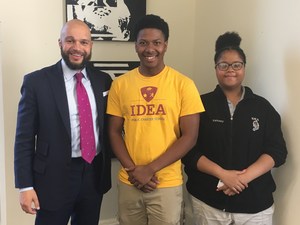 Two IDEA scholars met with DC Councilmembers Robert White Jr. and David Grosso on April 26 to advocate for expanded funding for DC3C, a program of the DC Special Education Cooperative that “supports DC students as they explore careers, college, and community,” according to the DC3C mission. Seniors Eric Hayman and Tiffany Moody, along with IDEA scholars Wayne Powell and Edward Keys recently participated in DC3C’s Spring Break Program, where they learned job readiness skills. At the end of the week, Eric and Tiffany were hired by CVS for two-month paid internships, and Tiffany was also hired by the YMCA for a summer internship.

IDEA Special Education Coordinator Tamara Clarke accompanied the scholars to the meeting. “The students shared the experiences they gained from the DC3C program,” she explained. “They talked about where they were before entering the program and the growth and knowledge they gained. They also discussed how they are using those skills in the classroom setting. The scholars also talked about the internships they were awarded and how they would return to the program to assist other students.”

White and Grosso were impressed by the scholars’ testimony. “Both council members were pleased to have the students speak,” Clarke said. “They both agreed that more funding should be provided for DC3C. Councilmember Grosso confirmed that he would definitely put funding towards the DC3C program, and that since the transition age [when students are expected to transition out of school if they are not planning to earn diplomas?] has been lowered to 14 in the District, programs such as the DC3C are necessary.”