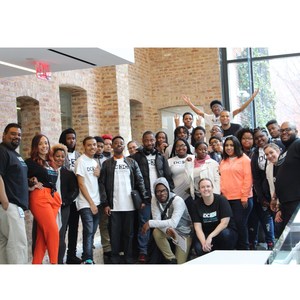 Four IDEA scholars who participated in DC3C's Spring Break job readiness program last month met with success!
Four IDEA scholars won't forget their 2018 spring break with DC3C, after completing a whirlwind week of job skills training, business dining etiquette, shopping for professional attire, and participating in a job fair in which all of them landed paid internships! The scholars also received laptop computers.
Edward Keys, Eric Hayman, and Wayne Powell were all offered internships at CVS, while Tiffany Moody was offered internships at both CVS and YMCA.
"The students who came from IDEA were exemplary," said Rebecca Foster, who manages the DC3C Spring Break program. "They impressed me, my colleagues, and all of the volunteers. I hope you are extremely proud of them. It was a very tiring week as I'm sure they'll tell you, but it was well worth it."
Published April 10, 2018 Print