Scholars Rack Up Principle Points to Redeem at School Store 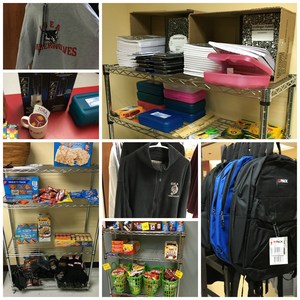 IDEA swag and more merchandise available for purchase only with points--not cash.
IDEA's School Store, which opened earlier this year, is increasingly crowded each Tuesday and Thursday when scholars have the opportunity to redeem their hard-earned principal points for a variety of goods, from IDEA swag to snacks to school supplies. Some items, like a bottle of Gatorade, might cost five points, while an IDEA fleece featuring the Timberwolf mascot is priced at 150 points. Scholars earn points by embodying IDEA's Five Guiding Principles in their behavior in and outside the classroom, maintaining excellent attendance, achieving academically, and other demonstrations of responsible and appropriate behavior.
IDEA's administration has been responsive to scholar requests for new items such as backpacks, phone cases, and fun accessories, as well as more IDEA-branded merchandise, including headphones which recently sold out.
Published March 20, 2018 Print