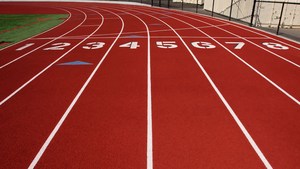 When she's not in the front office, you'll find Erika Wilkes in the gym.

Yesterday was the first practice of the spring track and field season at IDEA, led for the first time by the team's new coach--also IDEA's new operations associate--Erika Wilkes. The team is open to IDEA scholars in all grades who are academically eligible to participate in sports.

Track practice will be held Monday, Tuesday, and Friday. Practice will be in the gym until the weather gets warmer, when team members will start running outside.

Since the team is just now forming, Ms. Wilkes does not yet know what events members will compete in, but she looks forward to learning their interests and identifying their strengths. Public charter school meets will be held April 10 and April 24, with high school championships scheduled for May 15. Ms. Wilkes will bring her team to observe the Dunbar Invitational on April 7 to help them understand how track meets work and how they can prepare to compete. She anticipates that the team will compete in other invitational competitions as well.

Ms. Wilkes began working in the front office at IDEA in early March. Previously, she worked as a paraprofessional at Marie Reed Elementary School and as a private nanny. "I came to IDEA to get back to what I feel like is my purpose," she explained. Ms. Wilkes ran track throughout high school, at both Woodrow Wilson High School and Dunbar High School. Her top events were the 4x4 and 100 meter.