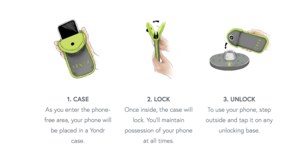 YONDR locked pouches were introduced this week to keep phones safe during the school day.
IDEA recently implemented a new policy banning cell phones from being used during the day by scholars, both in the classroom and in the halls and cafeteria. This rule was designed to reduce distractions during instructional time and eliminate opportunities for cyberbullying or misuse of social media on campus. Scholars were asked to leave their phones in a bin when they arrived at school and pick them up at dismissal.
Many scholars, however, were worried about being separated from their devices all day. In response to their concerns, IDEA is piloting the use of new secure phone pouches from a company called YONDR. You slip your phone into the pouch and lock it. You keep the pouch (and your phone) with you all day, and at the end of the day visit an unlocking station to unlock your phone, return the pouch to the school, and you can use your phone again.
The pouches are increasingly popular not just in school settings, but also with musicians and comedians who are asking audience members to lock their phones in a pouch to better enjoy a performance, in courtroom settings, at weddings and other special events, and anywhere that people want to have a distraction-free environment while keeping their phone secure.
Published March 20, 2018 Print