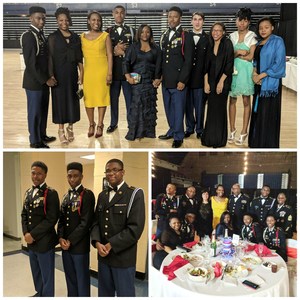 Each year JROTC cadets wear their finest and bring their best manners to the event.

JROTC officers and cadets enjoy the opportunity to dress their best and employ excellent social skills and table manners at the annual Military Ball, held this year on Saturday, March 17 at the DC Armory. Fifteen JROTC officers and cadets from IDEA, along with some of their parents and instructors and IDEA administrators participated in the black tie event. IDEA Principal Nicole McCrae was escorted by IDEA JROTC Captain Sir Jerome Treadwell.

Scholars were introduced to cadets and officers from other JROTC units in the DMV. IDEA's Malaysia Johnson was IDEA’s spokesperson for the evening, chosen to present IDEA's JROTC program, mission, and accomplishments to the group. After the formal elements of the evening, including a receiving line, speakers, and dinner, the colors were retired and the scholars enjoyed music and dancing.