Coach Coleman and the Future of Basketball at IDEA 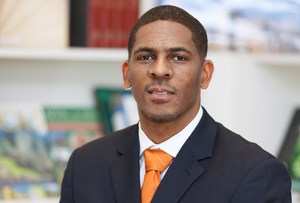 IDEA's head basketball coach brings a global perspective to the court and the desire to make IDEA a national basketball powerhouse.

Before Travis Coleman became IDEA’s head basketball coach, he coached professionally in China—first a men’s team, then a women’s team from the Chinese Army, and finally the Chinese women’s Olympic team, which made it to the 2016 Olympics in Rio de Janiero, Brazil. Before that, Coach Coleman was a strength and conditioning coach at Howard University, where he trained athletes on 19 Division I teams, as well as a coach at Towson University. Early on, Coleman was a pro quarterback and had stints in various pro leagues including the Arena Football League, Canadian Football League, and the NFL. Now, Coach Coleman is ready to bring his global experience to IDEA’s home court. “I wanted to implement my expertise at a development level where I could make a significant difference,” he said. “I want to take my ideas and philosophy and put them into action.”

“I want IDEA to be a national powerhouse for basketball,” Coleman explained. “I’m inviting student athletes to IDEA to see our beautiful building and talk to our administrators and academic staff. I am recruiting. We are holding tournaments here so younger athletes can see what we have to offer.”

Coleman understands the value of cultivating well-rounded students. “When I was in China, I saw parents were determined that their children receive a high-quality education. They wanted their children to get the highest scores on the SAT and ACT so they could come to the West for college. But athletics are a crucial part of development for a young people.” Coleman, who is fluent in Mandarin Chinese, is working with a basketball academy in Beijing to tell Chinese students about opportunities at IDEA. He believes international students and local students could teach and learn from each other on and off the court. Coleman is also communicating with coaches in Kenya and Colombia to spread the word about IDEA.

Meanwhile, Coleman is working with current and prospective players at IDEA to shore up their academic performances, after eligibility issues kept some players on the bench this past season. “Your quarter one grades determine your eligibility to play, even though basketball starts in the second quarter,” Coleman explained. “I am going to be hands-on in monitoring kids’ performance in class, making sure they’re getting the academic support they need in terms of tutoring and Saturday school, and making sure their parents are involved and encouraging them to study.”

When this season ended, Coleman’s planning for next season was already underway. “I’m going to set a high standard for getting on the court, and people will want to be part of this team.”