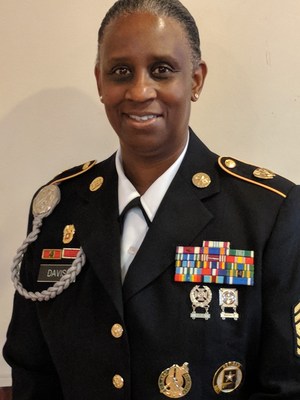 Sgt. Davis comes to IDEA after a 22-year career in the US Army and a decade of experience teaching JROTC.

The US Army took 1Sgt Useeth Davis to Germany, Italy, the Netherlands, and Korea, not to mention North Carolina and Georgia over her 22-year career. She worked in communications as a network switch technician before being promoted into a managerial role as first sergeant. But Sgt. Davis never expected to have a career in the military.

“I went to college first,” she recalled. “No one in our family was in the military. But when I graduated from college, I realized I was trying to fulfill someone else’s dreams. I told my mom I needed to get away and grow up—figure out what I wanted to be and do.” Originally Sgt. Davis signed on for four years and paid off her college loans. “But once I did my four years, I realized I loved it so I made it my career. I have no regrets.”

After retiring from the Army in 2007, Sgt. Davis taught JROTC for a decade in Baton Rouge, Louisiana. When she relocated to DC, she wanted to continue teaching JROTC, so she was thrilled when she found IDEA. “Teaching JROTC is my love,” she explained. “We see children who haven’t developed yet and we are integral to them becoming productive citizens in our communities, going to college, or into the workforce. When you’re able to do that, you feel your worth.”

Sgt. Davis values the role JROTC plays in teaching students teamwork and leadership skills. “We teach them how important these skills are and how they apply to life. Our program is not about joining the military, although that’s an option, but about becoming a better citizen.”

The unique opportunities that JROTC provides to students are exciting to Sgt. Davis. “This isn’t your typical classroom,” she explained. “We do hands-on projects, we put our students in situations where they’re leaders and don’t realize it, we do community service, and we have drill teams that compete and perform.” JROTC students learn about a broad spectrum of subjects, including military leadership and rank structure, US history, cultural diversity, first aid, and more. No matter what the subject, Sgt. Davis consistently works to instill respect—self-respect, respect for peers, and respect for authority.

One teaching tool that Sgt. Davis uses is an interactive program that enables individuals and groups to answer questions and solve problems that appear on the smartboard. She tries to place students in different kinds of groups so they can learn from and with each other and develop leadership strategies.

The challenge for Sgt. Davis is changing her students’ mindset. “When kids lack discipline and confidence, we have to change that, whether it’s by helping them advance two levels in reading, or teaching them how to resolve conflicts or how to understand their own behavior and personality. We want our kids to understand their worth. We all bring something to the world. JROTC teaches you how to identify your potential, but you have to want to strive and use the tools we give you.”