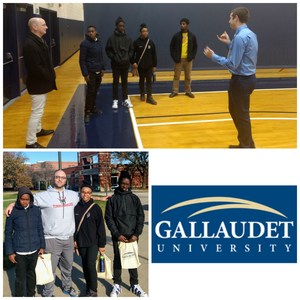 Ian Levine took students who have studied sign language with him to the country's only university specifically designed to accommodate Deaf and hard of hearing individuals.

Scholars in IDEA’s AYA program, who have been studying American Sign Language since August, had the opportunity to use their new skills in a real-world setting when they took a field trip with their teacher, Ian Levine, to Gallaudet University in early December.

“We took a signed and voiced tour of Gallaudet, led by a student ambassador,” explained Mr. Levine. “Our scholars got to ask people who are deaf and hard of hearing about Deaf culture.”

“I wanted to show my students that you can absolutely succeed in this world, even if you have a disability, or a perceived disability,” explained Mr. Levine. “People in Deaf culture don’t see Deafness as a disability, but often other people do, just as some people see learning differences as a disability.”

“The field trip was transformative for my scholars,” Mr. Levine said. “My student who is most fluent in ASL, after only studying with me for a few months, found out on the tour that you do not have to be deaf to attend Gallaudet, and she expressed interest for the first time ever in going to college.”