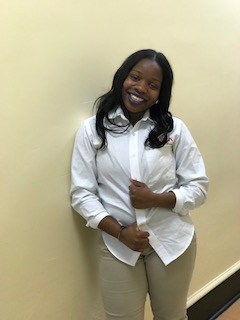 An honor roll scholar and captain of the Lady Timberwolves basketball and volleyball teams, to say Daesha Smith works hard is an understatement. Her long hours studying and practicing recently helped bring her one big step closer to her lifelong dream of becoming a pediatrician, when Daesha was awarded a full scholarship—valued at $55,376—to Albright College in Pennsylvania.

Daesha applied to 10 schools, primarily on the East Coast, but she was particularly drawn to Albright because of its nursing program, athletics, and diversity. “Albright has a great hands-on nursing program which will allow me to experience nursing first-hand and practice my life-long passion of caring for other people.” Daesha hopes that a nursing major will serve as a strong foundation for medical school and a specialty in pediatrics.

“I also looked at the sports teams at Albright, including volleyball, basketball, and softball,” Daesha said. She has played on IDEA’s varsity volleyball, basketball teams for a combined eight seasons. “Albright sports are in the top 100 in the country, and I would like to advance my skills under their coaching staff.”

“Daesha plays as shooting guard and had been named league MVP and has been our leading team scorer,” said Teika Thompson, coach of the Lady Timberwolves basketball team. “Daesha is one of the hardest workers I know. she is ideal on the basketball court with the strength and heart of a true born leader.”

While she has thrived during her time at IDEA, Daesha appreciated the diversity of Albright. “I was brought up in all black schools so I wanted to experience something new. Albright will give me a change of scenery and give me a chance to spread my wings and try new things with different people.”

As one of 12 children, Daesha knows her scholarship will help her family tremendously. “This scholarship has put my family at ease, with me being the next one coming out of high school and going to college. My family has supported me since day one. They help me focus and encourage me to do better than I did the day before.” Her own parents didn’t have the opportunity to attend college. “They had to put their dreams on hold to make sure that we were straight, and that we had everything we needed.” Now Daesha will have a full ride to a great college, so her parents can check that off the list.

“Daesha has always been very strong academically,” said IDEA Academic Counselor Lori Briscoe. “Her ability to lead both on and off the court never go unnoticed. She has an inner drive and determination to always enhance her learning academically and athletically. She has a very bright future.”