Scholars Honored for Academics, Attendance, and Guiding Five in Quarter One 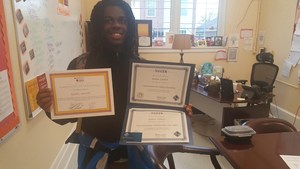 At the quarter one awards assembly, scholars were recognized for their hard work.

On November 7, the entire IDEA student body gathered to recognize those scholars whose academics, attendance, and adherence to IDEA's guiding five principles were exemplary during the first quarter of the 2017-2018 school year.

Scholars who earned GPAs of 3.0-3.4 earned the designation of honor roll. These scholars were:

Scholars who earned GPAs of 3.5 or higher were named to the principal's honor roll. These scholars were:

ACAD scholars were recognized for receiving NCCER certifications that demonstrate mastery of construction and safety skills. Scholars whose lexile reading scores were 1,000 or above were deemed college and career ready readers.

Scholars who have attended school every single day of the first quarter, and who achieved 95% attendance, were also recognized.

Scholars representing every grade level and electives were also recognized by staff for their dedication to living up to the IDEA Guiding Five Principles.

Demarko Simmons-Link and Kendi Trejos were named Students of the Month for September and October, respectively.