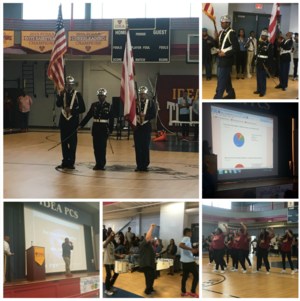 Cadet leaders involved the entire school and community in efforts to combat bullying.

IDEA's JROTC cadet leaders decided to respond to bullying behavior they noticed by designing and holding an anti-bullying rally as part of anti-bullying month in October. "The cadets came to me with a formal briefing in September," said Principal McCrae. "They worked with community leaders and partners to create a successful school wide event." The rally began with the entrance of the color guard, posting of the colors, and recitation of the Pledge of Allegiance.

Cadet leaders had created a bullying survey to better understand IDEA students' own experience with bullying. More than one-third of the student body responded to the survey. At the rally, students discussed what bullying is, the results of the survey, and how to deal with bullying behavior if it's happening to them or they witness it.

Community leader and local pastor Rev. Jenkins shared his message with the students about respect and positive behavior, and IDEA student Michael Artemus shared his own experience being bullied and how he transformed the situation. The rally also included a video of celebrities describing how they dealt with being bullied as kids. Students wore blue anti-bullying t-shirts designed by IDEA teacher Tiano Brown. The step dance team and the drum line performed as well.

The rally was followed by the homecoming dance, hosted by WPGC 95.5 DJ Richie Rich.