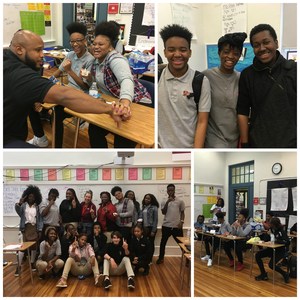 Scholars in Geometry are studying harder to help their classes earn prizes.

IDEA geometry students are more eager than most to see if their teachers have graded their tests yet. Ms. Simonsen, Mr. Boyce, and Ms. Thompson have created a healthy competition between their four classes to see whose class has the highest weekly average on their tests. “We post on the boards the rankings of each class from first through fourth place, and we recognize the most improved students and the top 10 high scoring students,” explained Ms. Thompson.

Recently when Ms. Simonsen’s second period class claimed victory, they celebrated with a private lunch of Chick-Fil-A and dessert treats. Each student whose name appears on the top 10 list or most improved list also receives a snack prize.

“Students are holding each other accountable for studying,” said Ms. Simonsen. “You see students working with each other more.”

“We go back and forth, saying, ‘My class is going to beat your class,’” said Ms. Thompson. “It’s healthy competition. And it keeps students focused on the lessons. Even students who are struggling want to get better because they know they have a chance to see their name on the most improved list. ‘I’m on a list?’ they ask. ‘I get a snack?’ They’re so excited.”

The geometry teachers have seen class averages rise since they implemented the competition from 55%-60% to 70%.