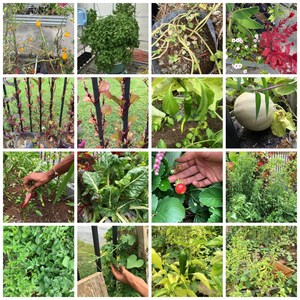 IDEA and Cultivate the City are working together to teach students the art and science of urban farming in the school's backyard.

Even as IDEA scholars are in their classrooms reading plays, solving equations, and studying history, right outside the school walls, lunch is growing. Strawberries, melons, cherry tomatoes, peppers, eggplant, okra, and cucumbers, and enormous basil plants are overflowing in containers and raised beds, the products of sweaty labor in the spring from IDEA seniors, Head of School Justin Rydstrom, and Cultivate the City Founder and CEO Niraj Ray. Through an innovative partnership with Cultivate the City, IDEA scholars are discovering the possibilities of urban farming and homegrown nutritious, delicious dishes.

Niraj Ray and Cultivate the City are building on the strong foundation that Rydstrom—along with Academy of Construction and Design teacher Ian Milne, ACAD students, and other scholars—laid last year when they built a greenhouse and raised beds and started gardening and composting. Cultivate the City brings to IDEA its experience working at 25 sites throughout DC, where it works, according to its mission, “to feed families and communities with pesticide-free, locally-grown food by growing vertically.”

This past summer, once the school gardens has begun to produce crops, Ray held cooking classes for students. “We made veggie pasta, using spiralized zucchini as the noodles, and they made their own tomato sauce,” Ray said. “That was the biggest hit. We also made salsa and homemade ice cream—mint chocolate chip, strawberry, and a jalapeño corn flavor—and smoothies. Many of the students didn’t have much experience cooking but every single student participated and found something they enjoyed making and eating.”

Ray also brought in a guest chef—Rano Singh of Pansaari, an Indian restaurant in Dupont Circle—to conduct a cooking demonstration for the students in an effort to introduce them to new flavors and foods. Cultivate the City works with Singh and other local chefs to grow fresh ingredients for them in gardens across the city. In fact, some of the Indian vegetables that Pansaari serves are growing at IDEA, including bitter melon and Malabar spinach, the kind used in the Indian dish saag paneer.

While it’s fun to try new foods, Ray’s primary goal at IDEA is to engage students and their families in growing food. “You can use a balcony, a community garden, or vacant spaces in urban areas,” he said. “Everyone can learn how food grows.”

Ray also aspires to teach students about career pathways related to urban farming. “There are so many aspects to urban farming—you can be involved in environmental science, greenhouse construction, garden management, cooking, communications about the food you’re growing and who it’s helping.” Cultivate the City has already hired ACAD students to build garden beds and benches for its other sites around DC, and plans to sell student-constructed items at its rooftop garden center, H Street Farms, located at 910 Bladensburg Rd. NE.

In addition to the plants growing outside, Cultivate the City is working with science teacher Kim Riley to raise tilapia in tanks in the science lab. IDEA and Cultivate the City plan to host a fish fry for the community using the farm-raised tilapia.

Other crops that students will plant and tend this fall include lettuce, kale, cabbage, collards, broccoli, parsley, cilantro, Swiss chard, onions, and garlic. Like the spring and summer produce, these herbs and vegetables will be used in cooking demonstrations, as ingredients in farm share produce boxes that community members can subscribe to, and in the IDEA cafeteria.

Although he grew up in New York City, Niraj Ray wasn’t always an urban farmer. “I never had a garden growing up,” he said. “But then I moved to Florida to get my master’s degree in environmental science, and in Florida you throw a seed anywhere and it grows into a tree!” Ray learned about the role of agricultural pollutants in climate change and the importance of making our agriculture system safer. From there, Ray went to work for the Environmental Protection Agency here in DC. “When I moved, I missed having a garden, so I started a petition to create a rooftop garden at the EPA. In my spare time I built the garden, and soon all my coworkers were asking me to build gardens for them or for their kids’ schools.” Ray realized he could make a significant difference in DC by teaching urban farming, and he created Cultivate the City in 2015.

Ray is eager to expand Cultivate the City’s partnership with IDEA and the Deanwood community. Parents, neighbors, and community members interested in learning more can contact him at info@cultivatethecity.com.