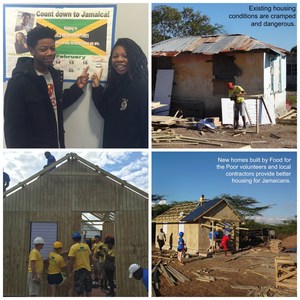 Accompanied by ACAD Director Shelly Karriem, two IDEA scholars spent four days in Jamaica helping to build houses and gaining a new perspective on life.
In four days in Jamaica--two spent on the construction site--junior Kayla Fleming and sophomore Kyeon Ford, accompanied by ACAD Director Shelly Karriem, were part of a 48-person team that completed 16 houses, a chicken coop, and a pig pen for residents of the town of Clarendon. Eight of the houses had already been built but needed paint, four had foundations laid, and the other four were built from scratch during the team's build. Families who were living in extremely cramped and unsafe conditions were able to move into the houses right away.
Chris Davitt and Craig Ruppert organized the trip in collaboration with nonprofit organization Food for the Poor. John McMahon of Miler & Long Concrete and Jay Long of Ruppert Landscape covered the expenses of the trip for both IDEA scholars and Director Karriem. Build volunteers included representatives from construction companies and the nonprofit, some of whom had construction backgrounds and some of whom just came with a willingness to learn. Even with all of the imported expertise, Karriem was surprised to see some building practices were not what she expected. "When you're in Jamaica you do things the Jamaican way. We mixed concrete for the foundations in a big hole in the ground. People jumped in with their boots and mixed it. There was no cement truck."
Most people in Clarendon live in poverty, with no access to affordable medical care. "Seeing the conditions they live in makes you really grateful for what you have," she explained. "And they don't have a sense of entitlement that a lot of people in American have." Because of the extreme expense of medical care, families who have children with special needs often cannot afford to care for them at home and turn them over to state-run orphanages. On the first day that Karriem and her students arrived in Jamaica, they visited an orphanage for children with special needs. "Kayla has four siblings who have special needs," Karriem said. "And she plans to go into social work to help families who have kids with special needs. We were able to spend time with them and hug them and talk with them. Kayla wants to go back. That part of our trip confirmed for her what she wants to do with her life."
Karriem believes that more students should have this experience and is looking for ways to make this happen for years to come. The trip was the first time out of the country and the first plane ride for both Kyeon and Kayla. Karriem is seeking sponsorship for participants, as the trip is not inexpensive. "You can't come out of that kind of trip the same way you went into it," she said. "You end up with new houses for people in Jamaica and you give this powerful experience to our young people. They need to know that people, who in most cases look just like them, are really struggling. Some of the Jamaican kids can't get to school because they have to pay for it and pay for transportation. Here in DC you get a free education. When kids come back home they have a renewed appreciation for what they have."
Published March 27, 2017 Print