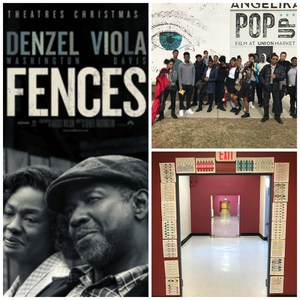 "To their surprise, the plot of the movie unfolded exactly the way August Wilson wrote it in his play," Hinds explained. "But they expected the flashbacks that we read to come to life on screen, [which didn't happen]."

"Many of the students found a connection to the son, Cory, in the movie, because they shared similarities in their pursuit of sports and the condemning of this passion from their parents," Hinds said.

According to Ayana Mason, "Cory was the one I connected with because I understand how he really wanted his father to like and love him and not put fear in him."

"The character that I connected with the most was Cory," said Mekhi McKinney, "because Cory was an adolescent just like myself and he pushes for success. He always wanted the best for himself."

"My overall impression of the movie was great," said Chloe McLean. "The actors did a good job and their stories connected and made sense, and the movie related to real-life issues."

Hinds assigned scholars the task of writing a reflection on their personal values, based on the examination of the characters' values in Fences. She also asked scholars create their own fences to decorate the 10th-grade hallway. Each picket on the fences represents a scholar's core values.
Published February 20, 2017 Print