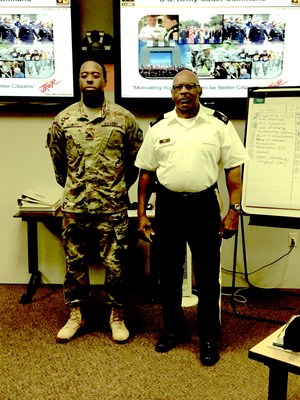 IDEA JROTC instructor Sgt. Bee recently traveled to Fort Knox, Kentucky Cadet Command School for recertification. He was assigned a soldier from US Army Military Intelligence to conduct his background investigation for clearance. It was the soldier’s first day on the job at Fort Knox after reporting for duty from Hawaii. Sgt. Bee quickly realized that the soldier was Specialist Charles Flowers, valedictorian of the IDEA class of 2007 and former executive officer of IDEA’s JROTC unit. Spec. Flowers was nominated for the Cadet Command Hall of Fame, earned his degree in engineering from the University of Massachusetts, and plans to attend Officer Candidate School. “Flowers is a wonderful example of how to be prepared for post-secondary opportunities and becoming a productive citizen who contributes to his community,” said IDEA JROTC instructor Maj. Terrance Lewis.