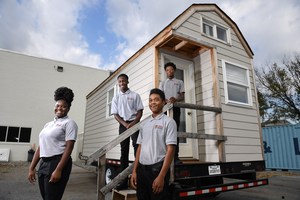 IDEA's Academy of Construction and Design was featured in the Washington Post Real Estate section.

If you’re tempted by the tiny house movement and think 160 square feet is just about right for your needs, you may want to contact the Academy of Construction and Design (ACAD) at IDEA Public Charter School in Northeast Washington.

Students in the program built a micro house with a kitchen, a bathroom, a sleeping loft with space for a queen-size bed and a storage loft, all set on a trailer for mobility. The exterior of the house was part of a sustainable living exhibit in 2015 and was moved to the IDEA campus so students could work with builders to complete the interior earlier this year.

The micro house, which includes sustainable features such as bamboo flooring, energy-efficient windows and HardiePlank lap siding, as well as an Avanti Energy Star 30-inch-wide compact kitchen, will be sold this fall for an estimated $50,000 to $55,000, with proceeds reinvested into annual homebuilding projects that provide hands-on training and mentoring to students.

“The students learned carpentry and construction math skills while they were working on the micro house,” said Beth Moore, programs director of the DC Students Construction Trades Foundation. “The students had to use hand and power tools to measure and cut the lumber and decide how much to buy.”

ACAD students will begin working on a second micro house this semester that will be completed and sold at the end of the academic year. In addition, the school is starting a larger project, building a single-family house in Northeast’s Ward 7.

“We just closed on the property, which was very difficult to find in the city,” Moore said. “We looked at many lots that turned out not to be buildable because they were too small, so the students have already learned about city regulations, building codes and planning as part of this process. Sometime this fall, we’ll get started with tweaking the design of the house and continue with the permitting process, which our students can participate in, and then we’ll begin the construction phase.”

This will be the second full-size house built by ACAD students. The first was built and sold several years ago on 13th Street NW, Moore said.

The DC Students Construction Trades Foundation, the accredited sponsor of the academy since 2005, supports skilled trades courses in public schools to generate interest in career and technical education as a conduit to a career or college.

Labor shortage is among the obstacles to new residential construction and part of the reason newly built homes cost much more than resales, according to Robert Dietz, chief economist of the National Association of Home Builders in Washington. The association estimates that there are approximately 184,000 available construction jobs across the country, a jump of 43 percent over the past three years. An estimated 30 percent of construction workers left the industry during the housing crisis, and many never returned.

Joshua Atkins is a product of the pipeline from the construction high schools into the industry. At 24, Atkins has worked for years in construction in office jobs and in the field with developers Miller & Long and Balfour Beatty.

He earned his bachelor’s degree in architecture from Tuskegee University with the help of scholarships and built on his high school education at ACAD, which then was at Cardozo High School in Northwest before moving to IDEA in Northeast. Atkins is currently working on Capitol Crossing, one of the largest development projects in the District.

“From the time I was 2, I loved to build complex things with Legos and to draw,” Atkins said. “When I was in 10th grade at Cardozo, I was lucky enough to join ACAD and start studying construction and engineering and to work on job sites in the summers.”

Atkins said he understands both the design side of construction because of his architecture degree and the hands-on labor required to build structures.

“Forty years ago, the school system abandoned vocational training in favor of preparing everyone to go to college,” said John McMahon, board president of the DC Students Construction Trades Foundation and chairman of Miller & Long. “That’s unreasonable when you consider that one architect needs about 300 employees to actually build what’s been designed.”

McMahon said the D.C. government’s mandate to push companies to hire District residents was at odds with the school system not preparing students for careers in construction, plumbing or electrical work. McMahon gathered industry and community leaders to establish ACAD in 2005, and he says 100 percent of the companies he contacted responded positively to the idea, including major firms such as JBG, Clark Construction, Hines Construction and Boston Properties.

“ACAD was established not just to provide training and workers for the construction industry but to give options to D.C. kids and teach them skills they can use for life,” said Shelly Karriem, director of ACAD since 2015. “We wanted to help kids who can’t go to college or don’t want to go to college, as well as those who do go.”

Karriem said one surprise has been that about two-thirds of students who complete ACAD pursue higher education.

“When students make the connection between what they are learning and a potential career, their academics improve dramatically,” said Carol Randolph, chief operating officer of the DC Students Construction Trades Foundation. “Some of them who didn’t think college was an option now have a better chance because their classes have become relevant to a job.”

The foundation provides college scholarships to ACAD graduates and supports the academy with about $300,000 in fundraising from members, typically builders and developers in the city.

“Funds raised for the academy, along with proceeds from the sale of the student homebuilding projects, are directly reinvested in the career and technical education program to create hands-on building, mentoring and training experiences for academy students each year,” Randolph said.

The biggest challenge is making it clear that the ACAD program is not just about preparing students for jobs as laborers, said Justin Rydstrom, IDEA’s head of school.

“We teach them life skills and explain that even if you start as a laborer, there are opportunities to move up quickly,” he said. “We rewrite the story for them and explain that they can work for a few years, make good money and get promoted, start their own business or go to school with less debt.”

Rydstrom says students get excited when they hear that HVAC technicians can earn $80,000 a year at a young age.

“Parents and school counselors can be the biggest obstacles because of the negative perception of construction as a blue-collar career,” Karriem said. “I recruit aggressively and get middle-school counselors on board to talk about the opportunities this education provides. These kids are learning lifelong skills that can help them in other fields, provide them with income and allow them to take care of their homes.”

IDEA has enrolled about 260 high school students for the coming year, about half of whom chose the ACAD program. The school is 55 percent male and 45 percent female, in part because more boys are attracted to the ACAD program, Rydstrom said.

Students can be accepted in any year, even as seniors, he said.

“Our school now has four state-of-the-art training classrooms that the foundation renovated for about $500,000,” Rydstrom said.

“That speaks to the commitment of the industry to these students.”

ACAD graduates are employed throughout the D.C. area, working on big developments such as the Wharf in Southwest and for commercial and residential builders.

“We tell our students, ‘If you are successful in this program and want to work, we will find a place for you,’ ” Karriem said.

For more information about the micro house, contact the DC Students Construction Trades Foundation at 202-340-5657.