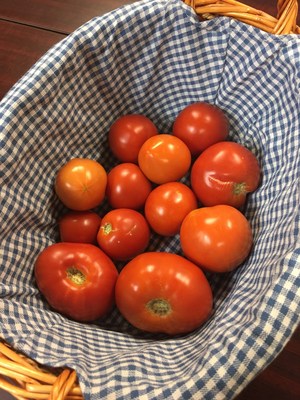 IDEA's Green Club grows food for the school and plans to feed the community in the future.

IDEA junior James Gross loves “getting down and dirty” when he works with IDEA’s Green Club, sponsored by Head of School Mr. Rydstrom. So far the club has planted tomatoes, watermelons, blackberries, and blueberries. The homegrown tomatoes were even served in IDEA’s cafeteria. The school cafeteria also contributes food scraps to the compost pile, which then becomes fertilizer for the Green Club’s garden.

Before joining the Green Club, James had never planted anything before, and didn’t realize how much people can grow in their own back yard-or school yard-gardens. In addition to gaining hands-on skills about planting and tending a garden and harvesting produce, members of the club have learned about the environment and ecosystem, the Anacostia Watershed, and how to keep pollution and trash out of the water.
“In Green Club you’re doing something for the community,” James explained. “Everybody knows what you’re doing because they can see the plants growing, and people outside the school know we’re here doing something to give back to the community.”
“Green Club is the best thing ever!” James said. “We learn lots and go outside. And it would be more fun and we could do more with more people.”
Green Club will start meeting again in October. To learn more, see Mr. Rydstrom.
Published November 21, 2016 Print