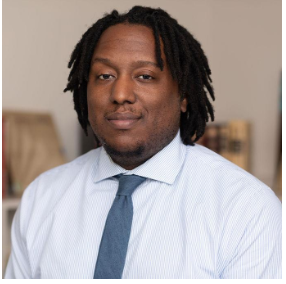 And We Are Celebrating IDEA's Shomari Jennings
As vice principal at IDEA, Mr. Jennings works with the entire staff and student body to create a positive school culture and help scholars overcome challenges in order to succeed. He loves what he does and it shows in all the ways he supports our scholars, faculty, and staff.
Before taking on this role as vice principal, Mr. Jennings trained math teachers working in Washington, DC public schools, having previously taught math at several local charter schools, including IDEA. He moved to DC from Boston, where he served as a teaching fellow in Boston’s Citizen Schools.
Mr. Jennings always knew he would go to college because his family emphasized the importance of education. What he wasn't sure of is what he wanted to do after he graduated. While studying economics and engineering at the University of Texas at Austin, he took on a job as a math tutor for other undergraduates. It was, he recalls, the only of the several part-time jobs he had that he really enjoyed.
When his supervisor at the tutoring center suggested Mr. Jennings explore teaching as a profession, he did. He earned his master’s degree in curriculum and instruction with a specialization in leadership at Lesley University in Cambridge, Massachusetts.
When he is not working hard at IDEA, Mr. Jennings likes to play basketball and video games.
Published April 6, 2022 Print