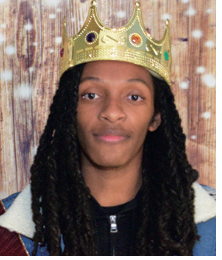 Congratulations to our graduated seniors!

Arkeem Matthews is an honor roll scholar who mastered a variety of carpentry skills and earned construction industry certifications through his participation in Academy of Construction and Design programs. He completed the ACAD Builds Internship, Associated Builders and Contractors mentorship program, and a four-day building project in Jamaica where he worked with other scholars and industry professionals to build a school for local children. Arkeem also participated in the Pepco Sustainability Forum and the DC Department of Transportation Urban Forestry Kiln project, built his display board for his National History Day project, and repaired furniture for IDEA staff members. Arkeem was a member of IDEA’s flag football team, which made it to the playoffs in 2019. As a sophomore, Arkeem completed the year-long Wilderness, Leadership and Learning program, which challenges youth to engage in new experiences and educates them about environmental conservation, health, fitness, justice, and service. Arkeem’s favorite classes at IDEA were carpentry and precalculus. His life lesson learned at IDEA is “stay strong and keep going.” After graduation, Arkeem plans to work with Fort Myer Construction Corporation.