Congratulations to our January Scholars of the Month 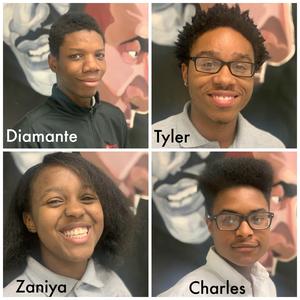 Scholars are nominated by teachers and staff for this honor.

Diamante Johnson is one of the most creative seniors at IDEA PCS. Don’t be fooled by his quiet demeanor. Not only does he love engaging in thought provoking conversations, but he never shies away from a dance challenge. Dancing is not his only gift, but also radio broadcasting. As IDEA’s announcements commentator, he keeps the entire student body entertained with the morning and afternoon announcements. As the first runner up in this year’s Homecoming Court, Mr. Timberwolf, Diamante demonstrated his willingness to represent his senior class. His past participation in IDEA’s JROTC not only demonstrated his love for service, but also helped to instill the discipline needed for him to consistently maintain on-time arrival and Honor Roll status. He is currently passing all of his classes. When occasions call for the seniors to dress professionally, he is always dressed for success. No matter which profession Diamante Johnson chooses, this young scholar is destined for great success.

Tyler is an exemplary 11th grader here at IDEA. His ability to ask important questions and supply important answers in class is much appreciated by his peers. He is not afraid to share his thinking, even when he might be mistaken. His willingness to work together with others makes him a sought-after partner in group work, and his leadership as a member of the basketball team and in the Peer Group Connections program make him an invaluable asset to the community. He respects himself, adults, and his peers, and comes to school every day prepared to learn. Nice work Tyler!

Zaniya is here ready to work hard. She has made a great effort in math and English to push herself despite any challenges that arise. She is a determined student in math and never hesitates to rise to the occasion. Awesome job Zaniya!

Charles is here consistently everyday in some spiced up version of an IDEA uniform - from his motorcycle boots to his flashy black pants - he is ready to begin his day. Charles has made a concerted effort during the second quarter to attend tutoring to bring up his grades. He has also been encouraging his peers to attend with him to help fix their grades. We can count on him to text or call his classmates to find out why they are not in homeroom. Charles works hard and it shows! Even when Charles is not passing all of his classes, I have no doubt in my mind that he is working on a plan to fix his grades and will bring them back up. Go Charles!