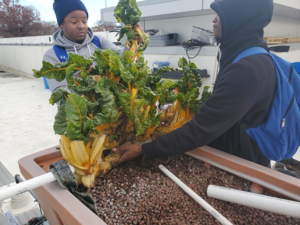 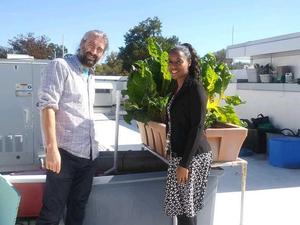 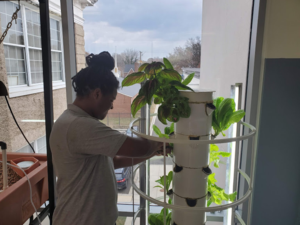 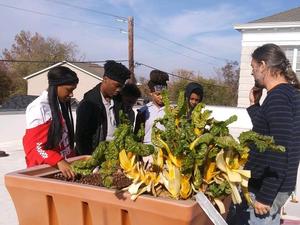 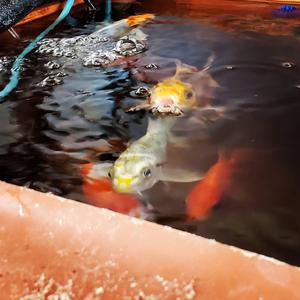 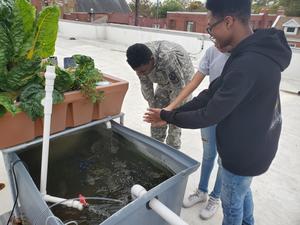 Environmental Science scholars are learning the process of growing produce without soil.

If you’ve never been up to the third floor or the roof of IDEA’s building, you may not have seen our amazing aquaponics system, which is maintained by our environmental science scholars in partnership with Anacostia Aquaponics.

Aquaponics is a farming system that circulates wastewater from aquatic animals such as fish to grow plants. In a recent lesson taught by Environmental Science Teacher Joy Harper and Anacostia Aquaponics Director Brian Filipowich, scholars learned about the elements of an aquaponics system and the environmental advantages of aquaponics over traditional farming. Scholars even had the opportunity to sample lettuce and kale grown in IDEA’s aquaponics system.

Building on this foundation, scholars will soon be designing their own aquaponics aquarium. “We’ve purchased a 29-gallon aquaculture aquarium for scholars to use,” explained Ms. Harper. “Scholars have begun researching what goes into an aquarium. Mr. Filipowich and I will be guiding scholars in developing an aquarium microcosm. The class that submits the best proposal for an aquarium will be able to make their design a reality.”