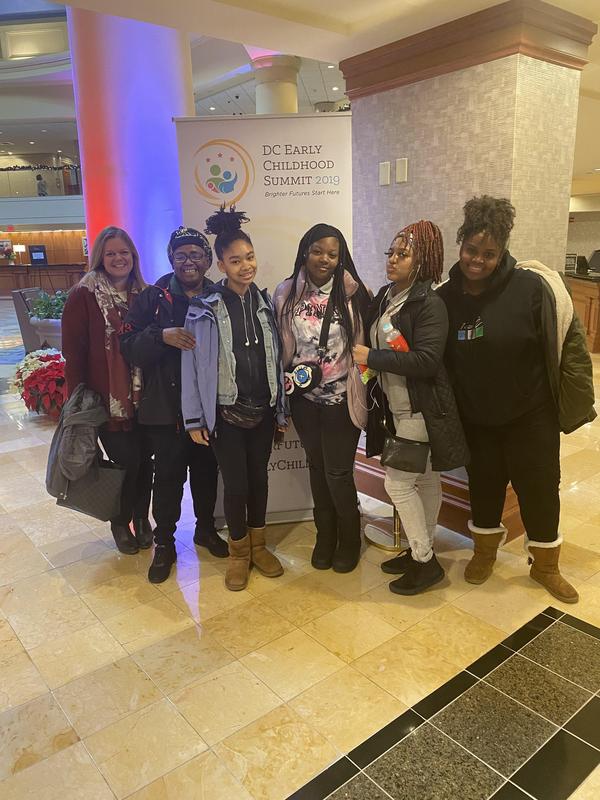 Even before she enrolled in IDEA’s Child Development Associate (CDA) classes, IDEA Junior Taniya Gaddis instinctively knew how to connect with kids. “When I was younger, I was the only one who could get my little brother Charlie to talk. He was 3 years old before he started speaking, because he has autism. I just interacted with him every day. I played with him and talked about what he was doing and got him to make eye contact with me.”

Taniya had babysat for family members and neighbors before she began studying early childhood education, but now instead of just playing with the kids, she understands why they’re behaving the way they do and how she can make a difference in their lives.

Recently Taniya and several of her CDA classmates attended the DC Early Childhood Summit, where they learned about the evolution of how childcare centers in DC operate and our growing understanding of children’s needs. Scholars attended a session on the long-term effects of chronic absenteeism, even starting in preschool. “We learned that when you’re late to PreK, it affects you when you’re a teenager and an adult. Sometimes children are absent because of their parents’ work schedules, so they asked us to come up with ideas about how we could help parents and teachers solve this problem in the centers where we’ll be working.”

Taniya also had the opportunity to meet representatives from childcare centers across the city, including Educare, where she will be working in the classroom beginning in January. CDA scholars must complete 420 hours working with young children in the classroom in addition to their own high school coursework. Once they fulfill those requirements and pass an exam, they receive their Child Development Associate certification. That credential makes them eligible to be hired as teaching assistants in DC childcare centers.

This is Taniya’s second year in the CDA program. After she graduates from IDEA and earns her CDA credential, she plans to attend Morgan State University to study social work and mental and physical health problems. Taniya believes this multidisciplinary approach will make her a better teacher or childcare center director.

Even without formal training, Taniya already possesses some innate qualities of a good teacher. “You have to be patient, pay attention at all times, and be sensitive to what’s going on with the kids. I feel like a lot of teachers need those skills, whether they’re working with preschoolers or high schoolers. In childcare centers, the teachers are working with the kids to understand them better and have insight into why they’re acting a certain way on a certain day.”

When she starts her classroom hours at Educare in January, Taniya is particularly looking forward to doing dramatic play with the kids or cooking because she did that with her family growing up. Beyond just those activities, however, Taniya just wants to help. “If I can do anything to help children become healthy young adults, I want to do that.”