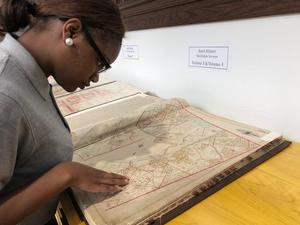 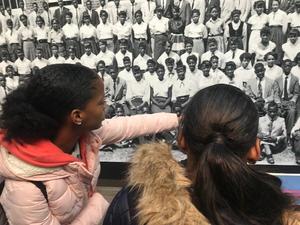 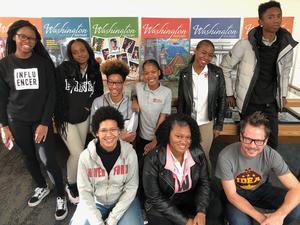 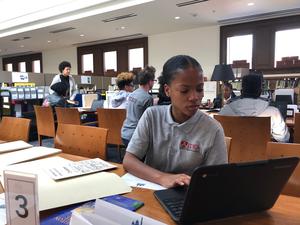 DC History scholars had the opportunity to use primary sources at the DC History Center.

Prior to the field trip, scholars conducted research on the Historical Society of Washington website to find primary sources that might be relevant to their chosen project topics. When scholars arrived at the DC History Center, the Society’s archivist had pulled their requested documents from the shelves and laid them out—along with some additional sources she had found—on tables labeled with scholars’ names.

Azzan Reed is studying the DC statehood movement. He learned that in 2016 a state constitution was created and voted on by DC citizens to establish the state of New Columbia.   Congress overruled the vote. Azzan’s National History Day project explores what the state government would have looked like if statehood had been achieved.

Feminist, suffragist, and civil rights activist Mary Church Terrell is the focus of Dezeray Walters research. Terrell’s career as a social justice crusader spanned from early days in the women’s suffrage movement through civil rights activism in her 80s, when she brought attention to unenforced DC laws that outlawed segregation in restaurants and other public places. When she and a group of activists went to Thompson’s Restaurant for lunch and were refused service, Terrell sued the restaurant.  The case went all the way to the Supreme Court, which ruled that the existing DC laws were clear and segregation was not acceptable in DC’s public spaces. At the DC History Center, Dezeray was able to read some of Mary Church Terrell’s original notes, written in pencil on yellow legal pads.

Other DC History scholars are researching the history of Go-Go in DC, the 1968 uprising, and the origins of the Barry Farm neighborhood, which was created by formerly enslaved people. US History scholars in Mr. Stevens’ classes are studying various aspects of the abolitionist movement for their NHD projects. Scholars chose to research people and events including Fredrick Douglass, William Lloyd Garrison, the Pearl escape, the Amistad, and the Creole.

Scholars in all of IDEA’s history classes are participating in National History Day projects. After conducting research, scholars may produce a documentary film, build a website, write a research paper, create an exhibit, or do a performance to illustrate what they’ve learned. IDEA will hold a schoolwide National History Day competition, and winners from that will go on to the regional competition in April.