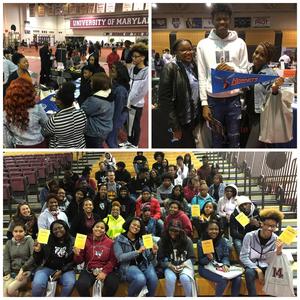 Several IDEA seniors received on-site college acceptances.
Forty-four seniors boarded a bus yesterday morning at IDEA heading to the University of Maryland Eastern Shore, located 130 miles away in Princess Anne, Maryland, for the UMES College Expo.
Representatives from more than 40 colleges were stationed in the UMES gym, ready to share information about their schools and programs with high school students from all over the DMV. Many colleges offered on-site applications, and nine IDEA seniors applied and were accepted to Johnson C. Smith University in Charlotte, North Carolina. One IDEA senior applied to and was accepted to UMES.
After the college fair, scholars dined in the campus cafeteria and concluded their visit with a tour of the campus. During the visit, IDEA scholars and chaperoning staff met with IDEA alumni Charissa Newbon, Morgan Glover, and Gerlethia Rich, all of whom are current students at UMES. Morgan and Charissa are both criminal justice majors and Gerlethia is majoring in history as she aspires to become a secondary school history teacher.
Heidi Simonsen, Sara Sharpe, Bill Stevens, and Natalie Hinds accompanied the scholars on the trip and were excited by the scholars' enthusiasm for exploring future educational options. "We look forward to continuing to provide this type of exposure to our scholars and thank all the team for their support," said Ms. Hinds.
Published October 24, 2019 Print