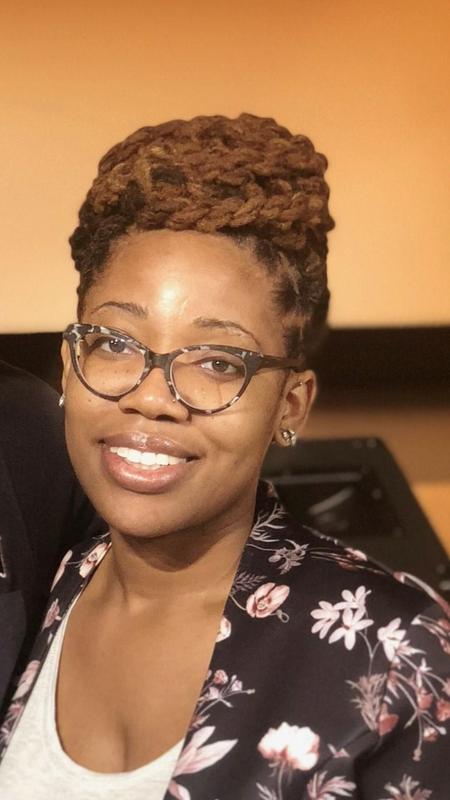 When Naomi Afari read IDEA’s Five Guiding Principles, she recognized their similarity to the values foundational to her own life and realized teaching at IDEA would be a good fit.

As IDEA’s new English IV teacher, Ms. Afari brings experience as an English, Drama, Television Production, and Senior Seminar teacher in public and public charter schools in Prince George’s County. She directed three student plays in her previous schools and acted in plays in college. Ms. Afari earned her bachelor’s degree from St. Augustine’s University in Raleigh, North Carolina, where she also worked at the Saint Monica Teen Center. She graduated from high school with her certification in early childhood education, but realized she wanted to work with older kids.

“I’ve always been a teacher by nature,” Ms. Afari explained. “If friends needed help with something in school, they would come to me.” She worked as a tutor in high school and a peer editor in college.

“There’s so much to explore teaching English. Literature is my favorite part,” she said. Paolo Coelho’s The Alchemist, Richard Wright’s Black Boy and Native Son, and Lorraine Hansberry’s A Raisin in the Sun are among her favorite works, as well as poetry by Maya Angelou, Langston Hughes, Nikki Giovanni, and Audre Lorde.

The seniors in Ms. Afari’s classes are currently studying gender roles, exploring stereotypes and different ways of identifying and understanding characters. The unit began with “The Harlem Dancer,” a poem by Claude McKay, and included “No Name Woman,” an essay by Maxine Hong Kingston from her memoir The Woman Warrior. Next up is Jeffrey Eugenides’ Pulitzer-Prize winning novel Middlesex.

“I want scholars to be able to identify literary devices when they see them and understand how those devices shape the reading,” Ms. Afari said, “But I also want them to relate the text to their everyday lives and make connections with something they’ve been through or observed.”

Ms. Afari strives to make her classroom a fun learning environment. “I’m always trying to do new things with my scholars that I’ve found online so scholars will have new experiences.” Creativity is key to Ms. Afari’s approach. “English is an art!” she said.

Outside of school, Ms. Afari spends her time with her two little girls, who she calls her “driving force.”