Scholars Read Classic and Contemporary Texts to Understand their Own Lives 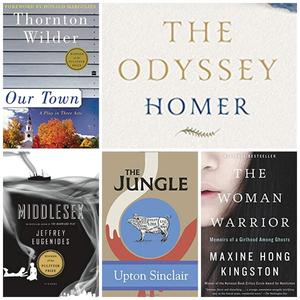 Here's an update on what our scholars are studying in English Language Arts classes.

Scholars in IDEA English classes are reading both classic and contemporary texts to learn about literary devices and make connections with the world around them.

This fall ninth-grade scholars are reading Homer’s The Odyssey, and exploring the development of characters and the big picture themes in the Greek epic on which so much other literature and popular culture is based.

Tenth-grade scholars are reading excerpts from The Jungle, Upton Sinclair’s graphic critique of the meatpacking industry in the early 20th century as an example of social commentary. As part of a unit on rhetoric, scholars have also read suffragist and peach activist Carrie Chapman Catt’s address to Congress, and Brigham Young University Professor Gideon Burton’s examination of rhetoric. The unit will culminate in each scholar completing a research-based argumentative essay or presentation that employs rhetorical appeals to call the audience to action. Some of the topics that scholars have chosen to research include abortion, gang violence, drug trafficking, child abuse, animal testing, the two-party political system, and cultural appropriation.

Eleventh-graders are discussing the social constructs of community through the lens of Thornton Wilder’s Pulitzer Prize-winning play Our Town.

In English IV, 12th-graders are exploring gender roles and their impact on community. Scholars are currently reading “No Name Woman,” part of Maxine Hong Kingston’s memoir The Woman Warrior, about the traditional role of women in Chinese society, in which they were supposed to exist in the shadows of their husbands and refrain from expressing their own opinions. Next on the English IV reading list is Jeffrey Eugenides’ Pulitzer-Prize winning novel Middlesex, which explores family and genetic history through the story of one family and in particular one person’s transformation.