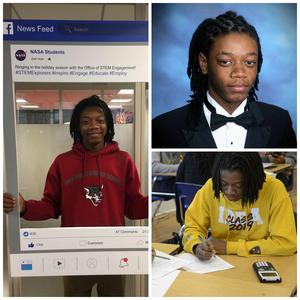 This is one in a series of spotlights on several of our outstanding seniors who will graduate from IDEA this Friday as proud members of the class of 2019.

Kyeon Ford helped build 16 houses in four days in Jamaica, and two micro houses in DC, through his Academy of Construction and Design classes; interned with NASA through Urban Alliance; and worked for the Young Women’s Project, Absolute Systems Engineering, and FF Cable Solutions, all before graduating from high school.

Kyeon’s strong work ethic enabled him to buy his dream car, a 2007 yellow and black Crown Victoria, on which he is constantly making improvements. Kyeon creates videos for his YouTube channel about his experiences as a car enthusiast.

He has also served as an ACAD ambassador, volunteered with ACAD’s adopt a neighbor program, and volunteered as a tutor and teacher’s aide. Kyeon was vice president of the National Honor Society and a member of the principal’s honor roll. He received IDEA’s Five Guiding Principles Awards and an award for his performance on the math section of the PARCC exam.

Math classes were among Kyeon’s favorites, because math always has a solution. He also enjoyed ACAD, photography, and video production. Kyeon plans to work for Fort Myer Construction Corporation as a quality control technician and study mechanical engineering. Kyeon would like to thank ACAD Director Ms. Shelly Karriem, his ACAD mentors, and the ACAD partner companies for introducing him to new opportunities.