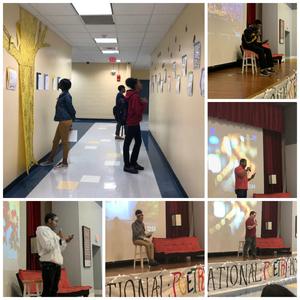 IDEA's celebration culminated in an assembly where scholars and staff members shared their own work.
In celebration of National Poetry Month in April, IDEA's own poets shared their work in print and on stage at IDEA. Scholars submitted their original poetry to their English teachers in early April and it was posted in the halls. Other scholars were invited to vote for the poems they liked best by putting stickers on them. Then on May 3, Tyler Newton, Diamante Johnson and Jalen Gross, whose poems received the most votes, read their work during a special assembly and received awards. Several staff members also shared their original spoken word compositions.

Other activities celebrating National Poetry Month included a challenge for scholars to identify the source of lines of poetry read during the morning announcements.
Published May 15, 2019 Print