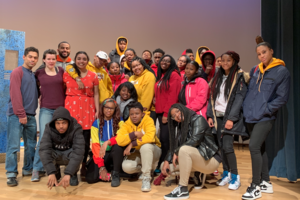 Scholars spent the day at the Smithsonian Museum of American Art.

Scholars studying Spanish went to to see ¡Óyeme! at the Smithsonian American Art Museum on March 22. This bilingual play included stories about immigrants, particularly from Central and South America. The play documented their experiences and motivations. Following the play, scholars engaged in a talk back activity with the actors and visited an exhibit that highlighted migration from other parts of the world. Scholars were enthusiastic and engaged with the play and the art and had a great time.