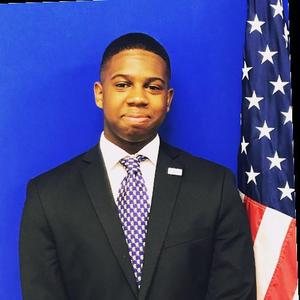 Richard's experiences as an IDEA scholar helped him on his way to preparing for law school.

When Richard Boller sets his mind on something, he is relentless. As an IDEA senior, Richard was accepted at Virginia State University. He did not, however, receive an invitation to join the honors program at VSU because his SAT scores weren’t quite high enough to meet the criteria. “People doubted I would get in, and I had to work harder as a freshman to prove that I deserved to be in the honors program. But I kept at it, and kept asking when I would be inducted, until finally they recognized that I had earned it,” Richard said. After being admitted into the honors program, Richard was elected as an honors council member, where he represented the sophomore class and organized social and academic activities.

That drive and determination were ignited when Richard was a junior at IDEA and served as an ambassador for the United States Holocaust Memorial Museum as part of its Bringing the Lessons Home program. Richard credits former IDEA history teacher Scott Ziegler with introducing him to the program and encouraging him to apply. “You have to take a 15-week course and learn the whole history of the holocaust,” Richard explained. “I was in the program with students from private schools who had 4.0 GPAs. When I was in 9th and 10th grade, I was on the basketball team. I wasn’t focused on academics. But when I was exposed to the caliber of students participating in the Holocaust Museum program, I said, ‘I need to step my game up.’ I always loved history, but these students are knocking off the competition. If you look at my transcript from senior year, I got a 4.0. I was exposed to people who got 4.0s and I liked the competition. That experience really shaped my educational pursuits and made me enthusiastic about education. I wanted to bring that energy I saw in the other ambassadors.”

Richard still volunteers every summer with the museum, working with holocaust survivors on the Art and Memory Project, where young people work with survivors to help tell their stories through art. Richard also leads tours and works with children visiting the museum.

Back at VSU, Richard is majoring in political science with a concentration in philosophy. He plans to attend law school to fulfill the ambition he’s had since age 13 of becoming a lawyer. In 2020 Richard was inducted as a member of Phi Alpha Delta, the country’s oldest law fraternity. Phi Alpha Delta encourages students from all disciplines who are interested in studying law to learn more about the profession, visit law schools, and apply. Members also participate in mock trials with students from other universities.

Another example of Richard’s persistence is his recent admission to the Thurgood Marshall Leadership Institute, sponsored by the Thurgood Marshall College Fund. The Fund typically provides scholarships to HBCU students who are planning careers in business or a STEM field. “I convinced them to allow me to participate as a social science major because I bring critical thinking skills, which are highly desirable especially during times like these,” Richard explained.

Richard’s increasingly impressive resume also includes an internship with the law firm of Hunter and Johnson PLLC, where he observed attorneys handling criminal justice cases. “I was able to sit in and see what the lawyers did, how they conducted themselves, and make sure I wanted to pursue this career.”

Through a program of nonprofit organization Mikva Challenge DC, Richard also interned with the office of Washington, DC Attorney General Karl Racine. As the 2021 President of the National Association of Attorneys General, AG Racine launched an initiative called The People v. Hate: Standing Up for Humanity, also known as Countering Hate. Richard supported this effort by creating a national directory of hate and discrimination statutes. He also mentored high school students who were participating in the research process.

This summer, Richard will be a student in Howard University’s Pre-Law Scholars Summer Enrichment Program, where he will study law cases, learn from attorneys about their areas of expertise, and prepare for the LSAT, which he will take this fall. After the program at Howard, Richard hopes to intern for a federal judge in DC.

Plans for the Future

“I wanted to become a lawyer because I saw all the turmoil in our country,” Richard explained. “I’ve read about Brown v. Board of Education, Plessy vs. Ferguson, Roe v. Wade. Being a lawyer will equip me with the tools necessary to combat hate and inequality. Being African-American is not easy. I come from dire poverty and humble beginnings. And I want to encourage other people who look like me or who come from other marginalized communities, who are seen as underdogs, to go to law school.”

Richard credits the staff at IDEA with helping him motivate himself to reach his potential. “The IDEA faculty members definitely shaped the way for me. They pushed me to do great things.”