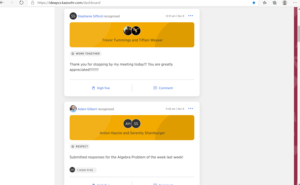 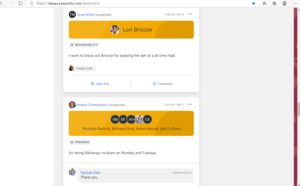 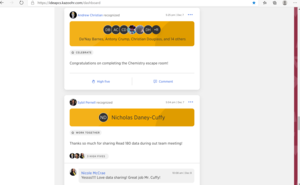 In recent weeks, IDEA scholars have converted their diligent efforts into delicious treats and their good work into games and gifts through the Kazoo recognition and rewards platform. Since COVID-19 school closures make it impossible to give high fives in the hall, make shout-outs in the announcements, or hang congratulatory posters in the hall, Kazoo enables scholars and staff to commend each other online.

Scholars receive points when they are recognized by teachers or by their peers for demonstrating IDEA’s Five Guiding Principles. When scholars amass a certain number of points, they can visit the virtual school store and redeem their points for prizes. So far popular prizes have included gift cards for Amazon, Bed Bath & Beyond, Buffalo Wild Wings, Chipotle, Express, Papa Johns, and Playstation.

Teachers and staff can also recognize each other for supporting their work with scholars and embodying the Five Guiding Principles for Faculty. IDEA administration also celebrates staff birthdays and anniversaries on Kazoo, as well as commemorating scholar birthdays.

“Kazoo gives us a way to go in and recognize scholars for different behaviors—you were on time, you celebrated another scholar, you were prepared, you participated in the discussion on the chat, you turned on your camera,” explained Dean of Students Lori Briscoe, who oversees Kazoo along with Dean Ulises Bengoechoa. “We even have siblings recognizing each other, saying ‘I’m glad you’re finally getting your work done!’”

“Now that scholars have gone in and made their purchases with their points, they’re sharing that with their friends, so word of mouth about Kazoo is getting around,” Briscoe said.

“Kazoo has huge potential,” said Dean Bengoechoa. “This is a pilot program--IDEA is one of two DC schools using the tool. Once it catches on, Kazoo could definitely help in building school culture.”

One unexpected benefit of using the platform during virtual learning is that the deans and other IDEA leadership can drop in on any classroom at any time to see how scholars are doing and reward the good things they see.

“There are scholars who have sent me a private chat to say, ‘I didn’t even know you knew me,’ after I gave them points,” Dean Briscoe said. “They are appreciative that someone is recognizing their hard work.