Students & Families » Congratulations to the IDEA Class of 2020!

Congratulations to the IDEA Class of 2020! 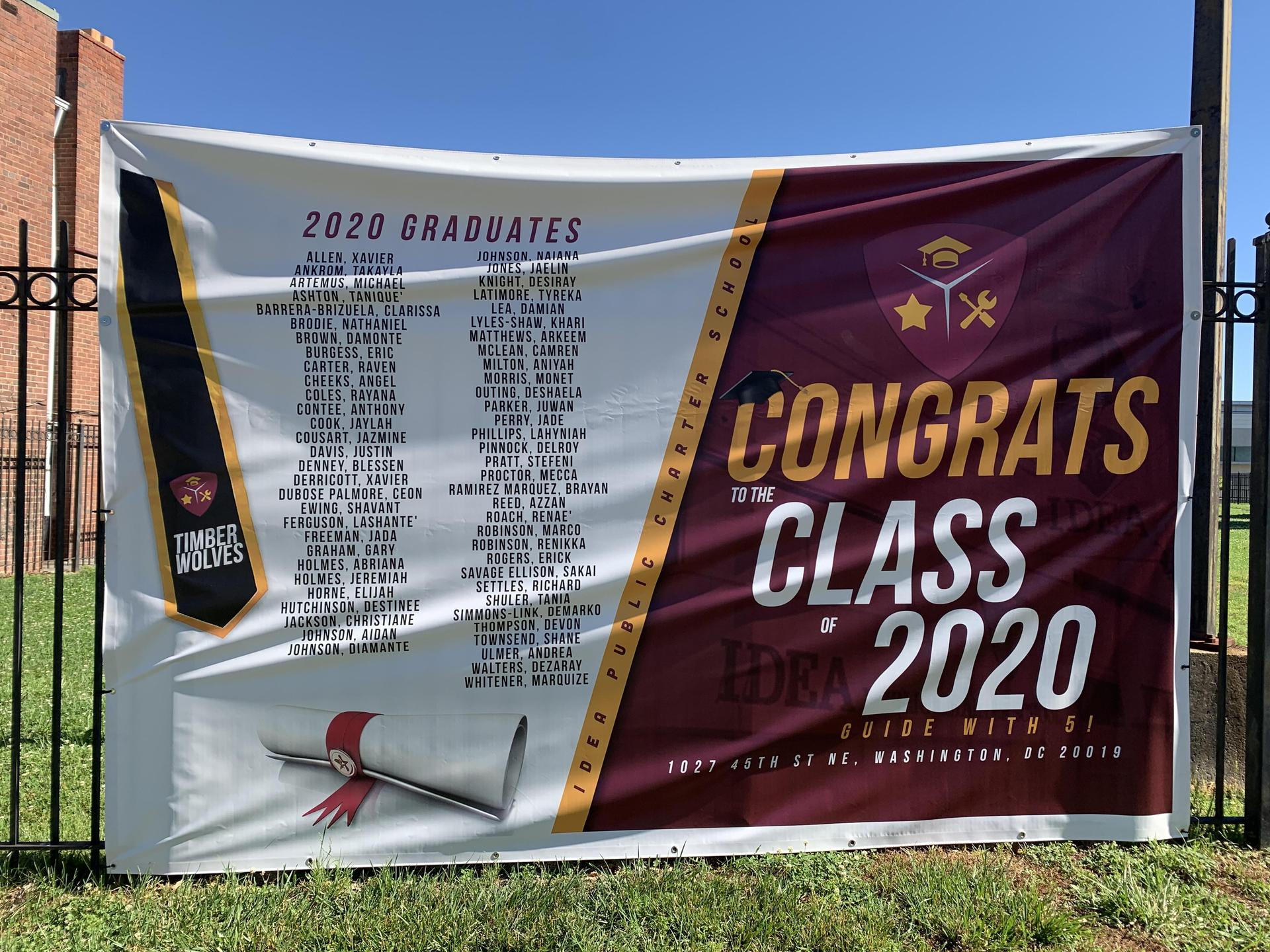 Congratulations to the IDEA Class of 2020 on their graduation on June 12, 2020! We are so proud of our graduates for their hard work and dedication and especially for overcoming the unexpected obstacles that 2020 threw in their way!
Watch IDEA's 2020 Graduation Ceremony here!
* * *
Each member of the Class of 2020 was assigned an IDEA staff mentor who worked with seniors throughout the year to help them push through to graduation and prepare for life after high school. Check out this video of mentors sharing special recognition of their mentees.
* * *
Check out these video speeches by Class of 2020 Valedictorian Michael Artemus, Salutatorian La'hyniah Phillips, and Senior Ceon Dubose.
* * *
Members of the IDEA Class of 2020

An honor roll scholar all four years of high school, Michael Artemus served as president of the National Honor Society and as a peer leader in the Peer Group Connection program. Michael earned second place in the District of Columbia National History Day competition, earning the opportunity to compete at the national level, for his project on breaking barriers in jazz in DC. Michael successfully completed two courses at the University of the District of Columbia Community College, and was selected to participate in Real World History, a District-wide honors history class. Through Real World History, Michael completed an internship with the Smithsonian Center for Folklife and Cultural Heritage. As a junior, Michael played second base for the Timberwolves baseball team. Favorite classes at IDEA included carpentry because he loves to build, music because he loves playing the bass, and English, where he transformed from a struggling scholar to a confident one. Michael participated in a four-day building project in Jamaica where he worked with other scholars and industry professionals to build a school for local children. Michael is grateful for the teachers and staff at IDEA because, “They pushed me and helped me realize that even if things get hard and stressful, I can make it. There would be times when I didn't think I could move on, but my teachers kept me moving and I became a better version of myself. I learned that I can do anything I put my mind to and I can reach my dreams.” After graduation, Michael plans to study electrical engineering at Syracuse University so he can become an inventor and make things to help people and the world.

La’hyniah Phillips achieved a variety of honors during her three years at IDEA, including honor roll, principal’s honor roll, perfect attendance, and scholar of the month. La’hyniah recently received the 2020 David M. Rubenstein/Economic Club of Washington, DC Scholarship Award. She was a member of the National Honor Society and a cheerleader and manager of the squad. La’hyniah completed an internship through Urban Alliance, where she worked with Live It Learn It, a nonprofit that works to close DC’s elementary school education gap. She also worked on health education with the Young Women’s Project, an organization that builds the power and leadership of young people in DC. One of La’hyniah’s favorite classes at IDEA was senior seminar, because it helped prepare her for the real world. La’hyniah’s life lesson is, “even though you may not want to do something, try it at least once. If it’s really not for you, don’t do it again, but you never know until you try.” She appreciates IDEA for helping her to “get back on track with my education and life outside of school. IDEA teachers helped me a lot just by preaching the truth.” After graduation, La’hyniah plans to study finance and business management at Clark Atlanta University and become a financial advisor.

Angel Cheeks made the most of her senior year at IDEA, making the honor roll all four quarters, competing in the One World Education essay competition, and embarking on a nine-day Civil Rights tour of the south with several of her classmates. She also successfully completed the college-level personal finance course offered at IDEA by University of the District of Columbia faculty. Angel was a member of the Timberwolves cheerleading squad all four years (?) of high school, and was active in Black Swan Academy, a community organization that inspires students to become “catalysts for change in their local communities” through political advocacy and community service. Angel also participated in the Dramatic Solutions college and career readiness program sponsored by the DC Department of Employment Services. Her favorite classes at IDEA were math and senior seminar. One life lesson Angel will remember from her time at IDEA is “to keep pushing forward and to never give up.” After graduation, Angel plans to attend Delaware State University with the goal of becoming a compliance manager in the field of criminal justice.

Blessen Denney is a volleyball player who was selected her senior year to play on the DC all-star volleyball team. She played volleyball for IDEA for and assisted with IDEA basketball games. During her time at IDEA Blessen received awards for perfect attendance and most improved. She participated in the nine-day civil rights trip through the South with classmates and teachers and completed the Dramatic Solutions internship through the Department of Employment Services. Blessen said her “favorite classes were all of them because they were challenging but I got through them.” A life lesson that she will take away from IDEA is to “always do what you want and never give up.” After graduation, Blessen plans to study social work at Johnson C. Smith University in Charlotte, North Carolina with the goal of becoming a social worker.

Ceon Dubose is a community activist who volunteered as a peer leader in IDEA’s Peer Group Connection program, played shortstop for the Timberwolves softball team, and earned awards for perfect attendance. She served as concessions manager and learned sports management with Coach Peter Camacho, and enjoyed her art studio and print design classes. For the past five years, Ceon has been an active member of Black Swan Academy, a community organization that inspires students to become “catalysts for change in their local communities” through political advocacy and community service. A member of the student advisory board of the DC State Board of Education, Ceon has participated in a variety of community conversations and conference panels on issues such as safe schools, dress codes, gun violence, and others. Life lessons Ceon will take from IDEA include that “asking for help never hurt anybody,” and “to perform to my best ability and push to greatness.” After graduation, Ceon plans to study political science at Johnson C. Smith University with the goal of becoming DC’s Ward 7 Councilmember or Mayor of the District of Columbia.

LaShante Ferguson is an honor roll scholar who excels at math. In her graphic design class, LaShante created inspirational posters for Black History Month illustrating compelling quotes by famous African-Americans. In addition to her math classes, LaShante appreciated her senior seminar class because it helped her prepare for college and life. She will take away from IDEA the knowledge that, “you can do anything you put your mind to.” After graduation, LaShante plans to study computer science and business at Virginia State University with the goal of becoming a software developer.

Jada Freeman is an honor roll scholar who successfully completed the University of the District of Columbia Community College’s First-Year Seminar. As a senior, Jada participated in the Dramatic Solutions college and career readiness program sponsored by the DC Department of Employment Services, through which she interned at USAID. Jada’s favorite class at IDEA was print entrepreneurship, where she learned the fundamentals of graphic design and how to launch a clothing business. Life lessons that Jada learned at IDEA included “never give up and don’t be afraid to ask for help when needed,” and “always be yourself.” After graduation, Jada plans to study sociology at Saint Augustine’s University in Raleigh, North Carolina with the goals of becoming successful and helping people with their problems. Jada would like to thank the 12th grade teachers and staff at IDEA for their support.

As a senior-year transfer scholar at IDEA, Naiana Johnson learned lifelong skills such as budgeting and job readiness in senior seminar. She valued discussions in English class about equality and police brutality and learned how to advocate for herself in school and in life. Naiana participated in the Dramatic Solutions college and career readiness program sponsored by the DC Department of Employment Services, through which she interned at CVS. She also completed the High School Internship Program through DC’s Rehabilitation Services Administration. Naiana’s parting words are, “I appreciate all of my teachers. They always tell me to chase my dreams and save money.” After graduation, Naiana plans to study nursing or fashion merchandising at the University of the District of Columbia.

Arkeem Matthews is an honor roll scholar who mastered a variety of carpentry skills and earned construction industry certifications through his participation in Academy of Construction and Design programs. He completed the ACAD Builds Internship, Associated Builders and Contractors mentorship program, and a four-day building project in Jamaica where he worked with other scholars and industry professionals to build a school for local children. Arkeem also participated in the Pepco Sustainability Forum and the DC Department of Transportation Urban Forestry Kiln project, built his display board for his National History Day project, and repaired furniture for IDEA staff members. Arkeem was a member of IDEA’s flag football team, which made it to the playoffs in 2019. As a sophomore, Arkeem completed the year-long Wilderness, Leadership and Learning program, which challenges youth to engage in new experiences and educates them about environmental conservation, health, fitness, justice, and service. Arkeem’s favorite classes at IDEA were carpentry and precalculus. His life lesson learned at IDEA is “stay strong and keep going.” After graduation, Arkeem plans to work with Fort Myer Construction Corporation. 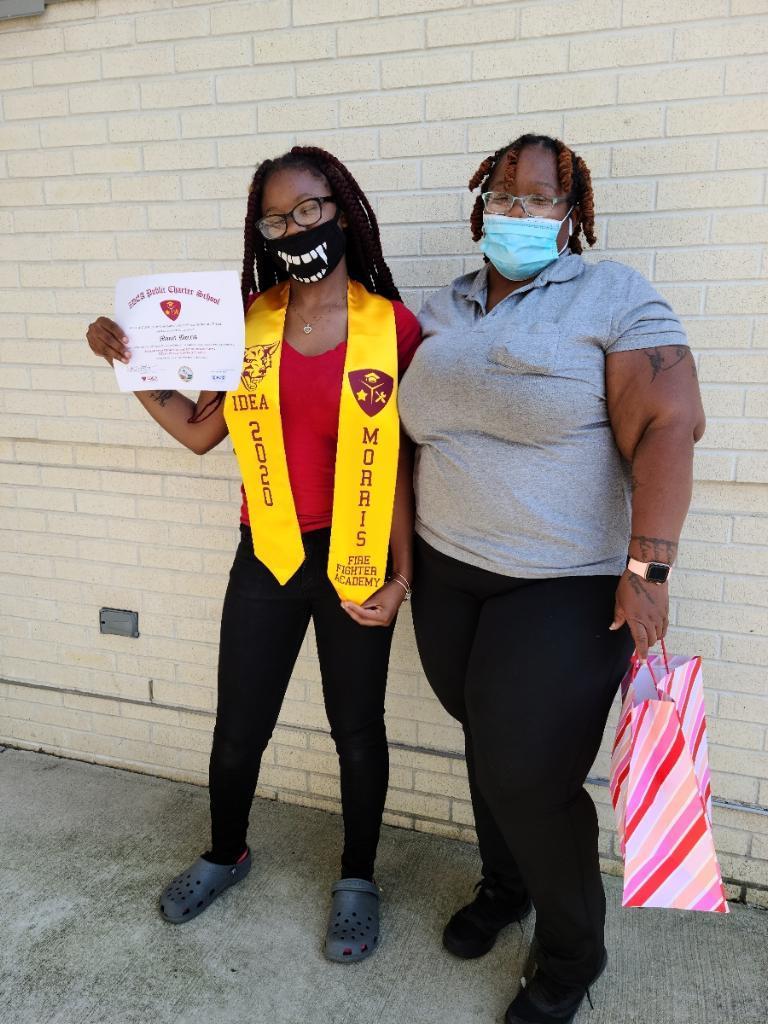 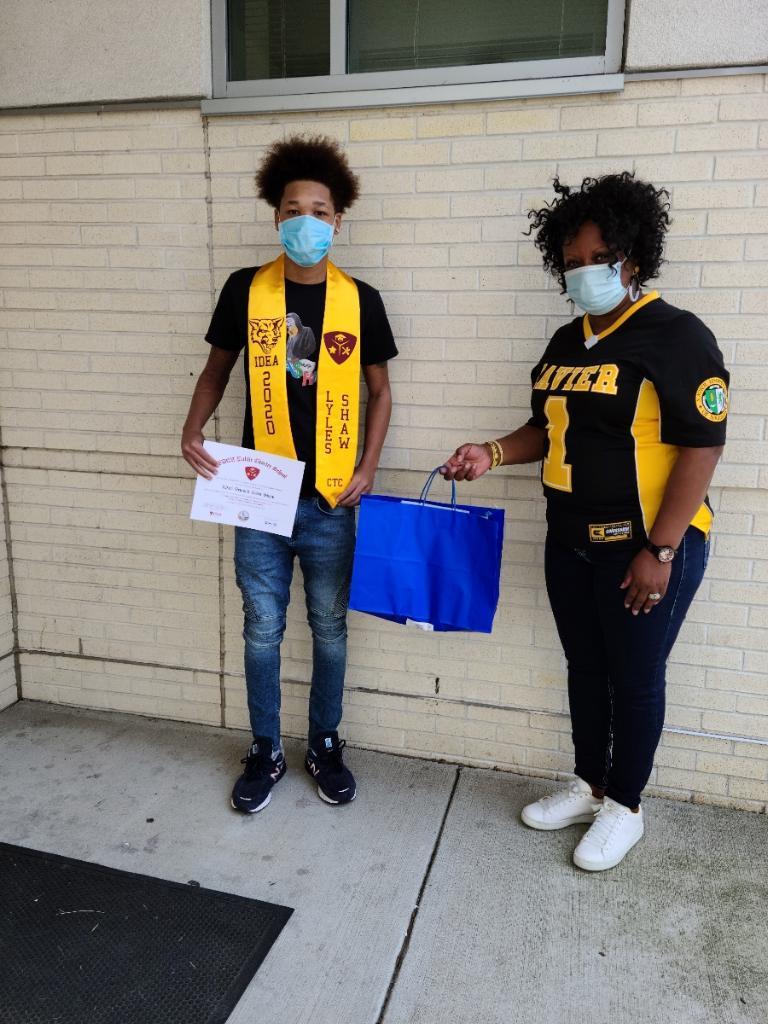 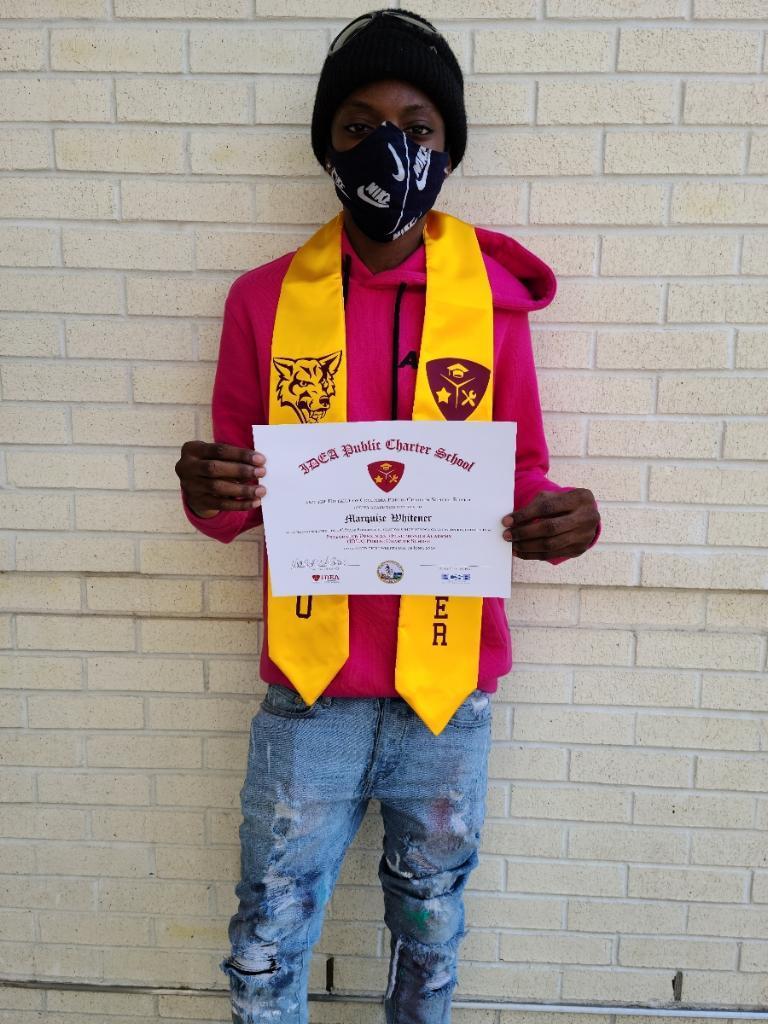 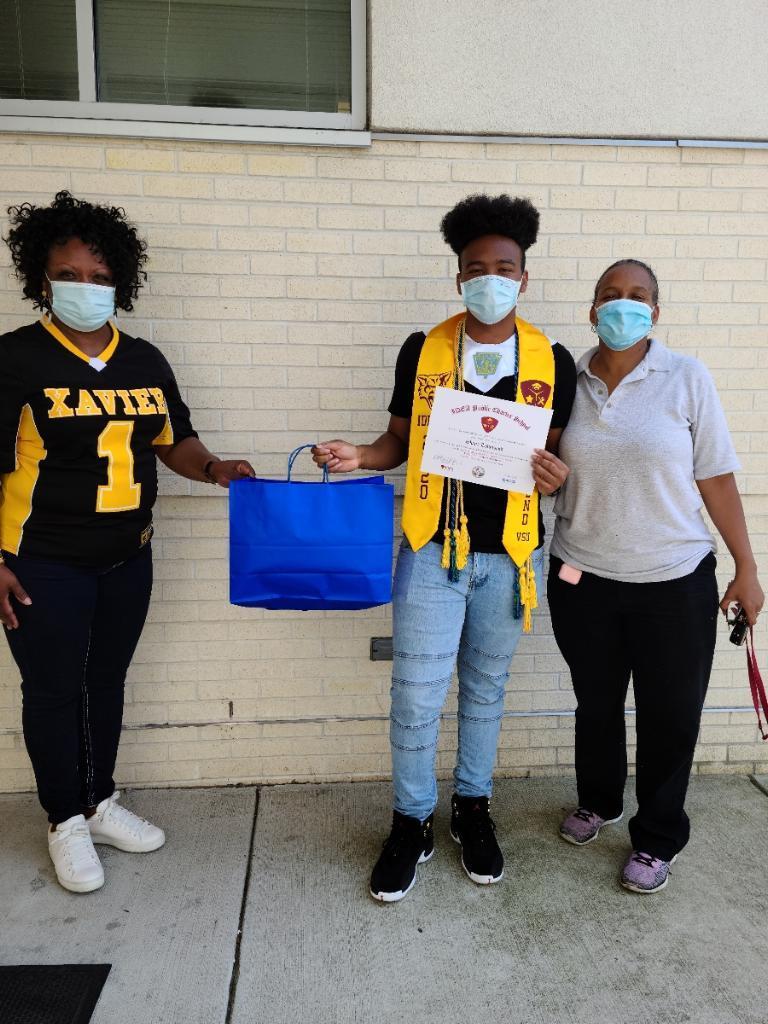 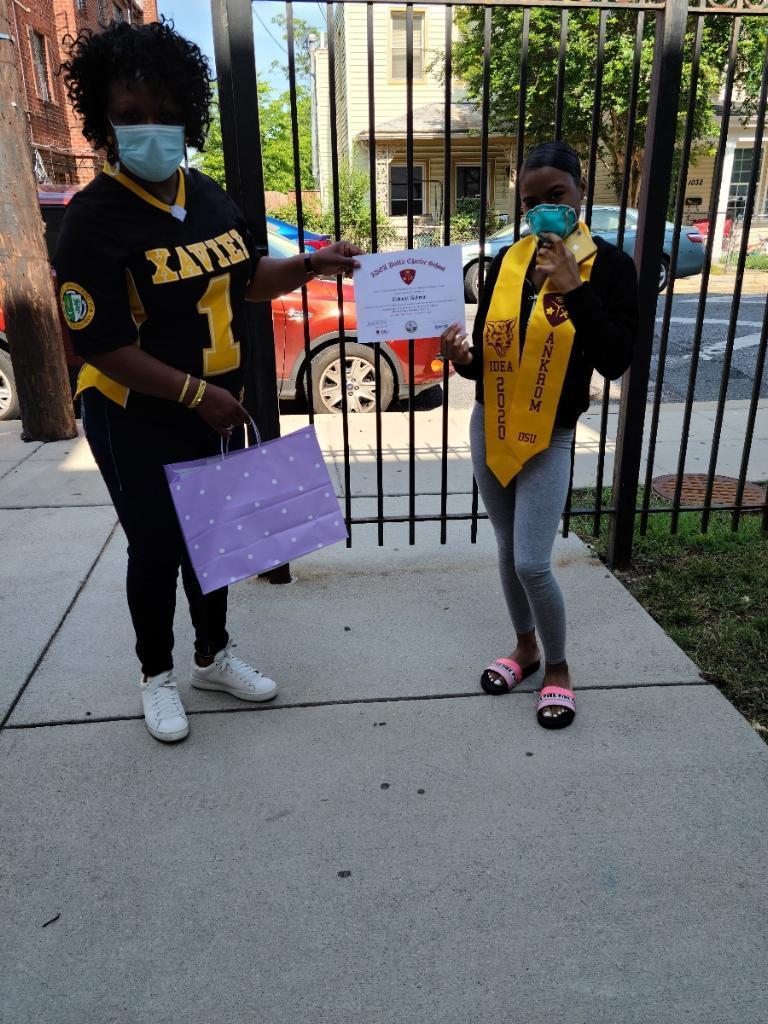 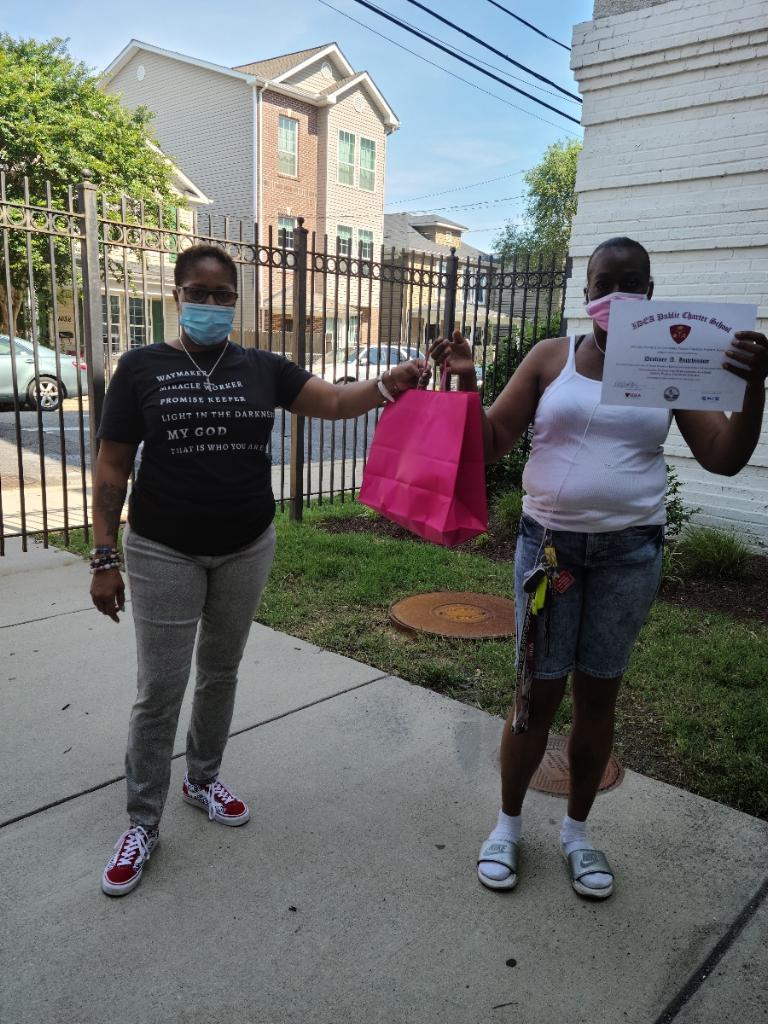 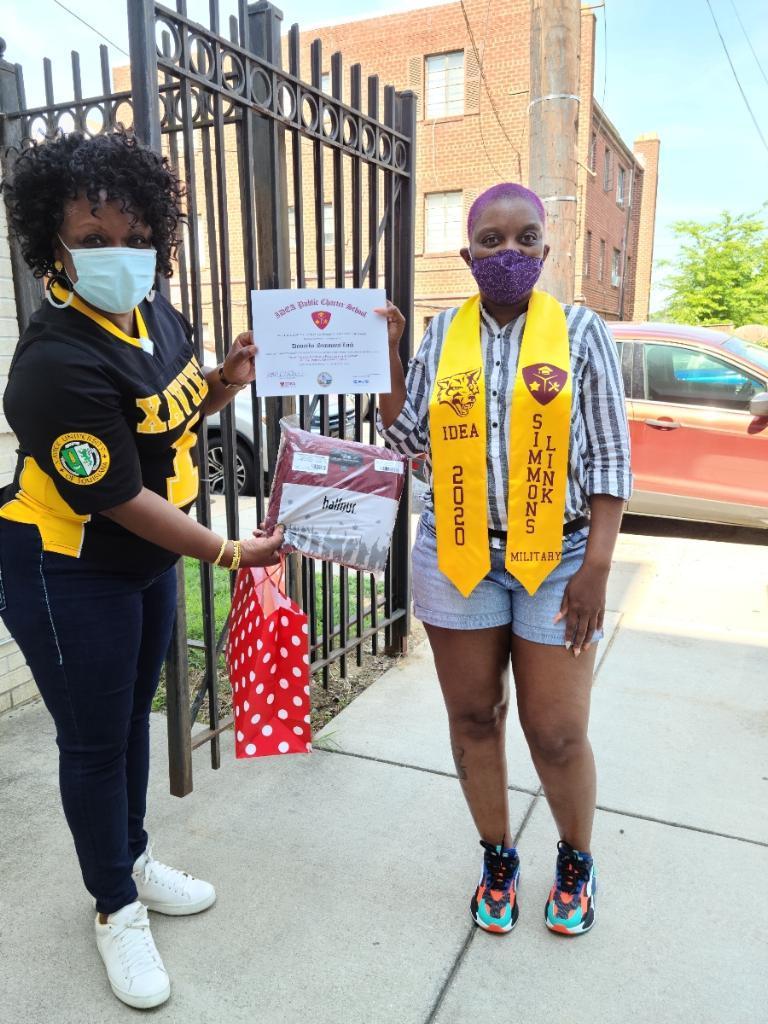 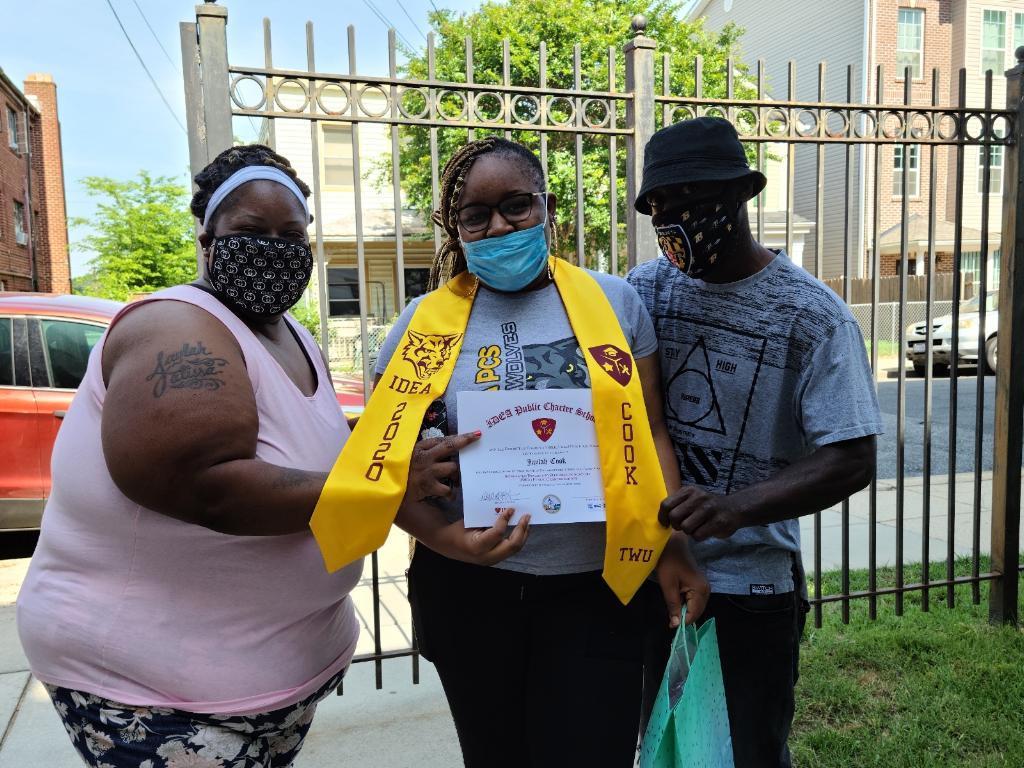 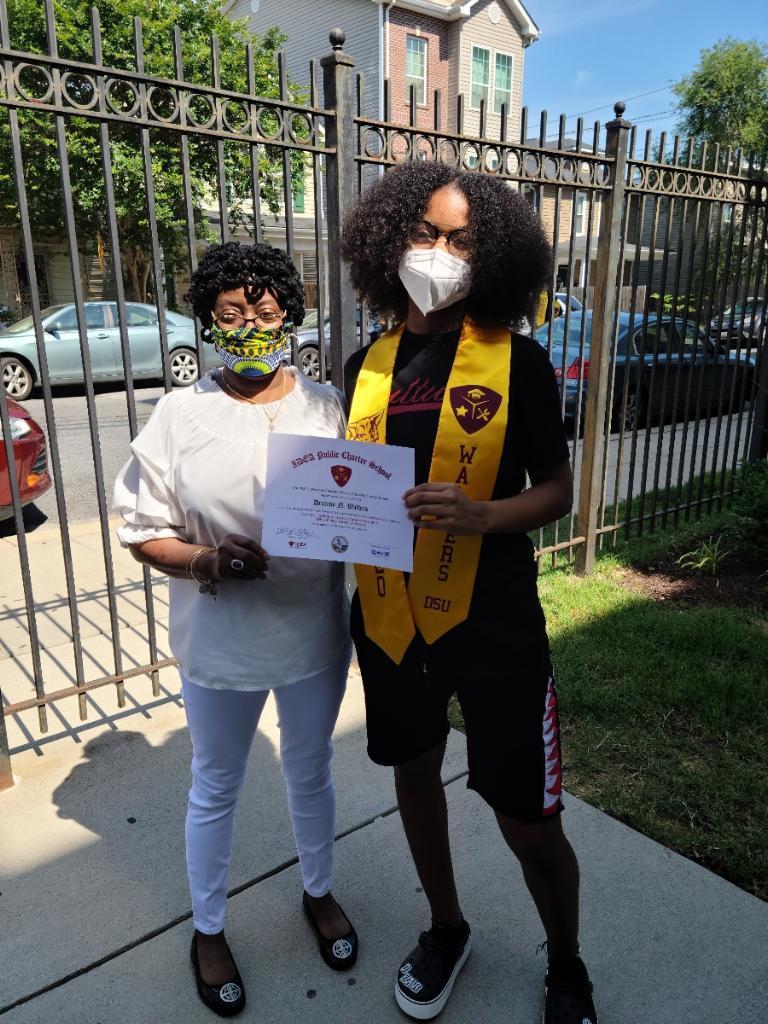 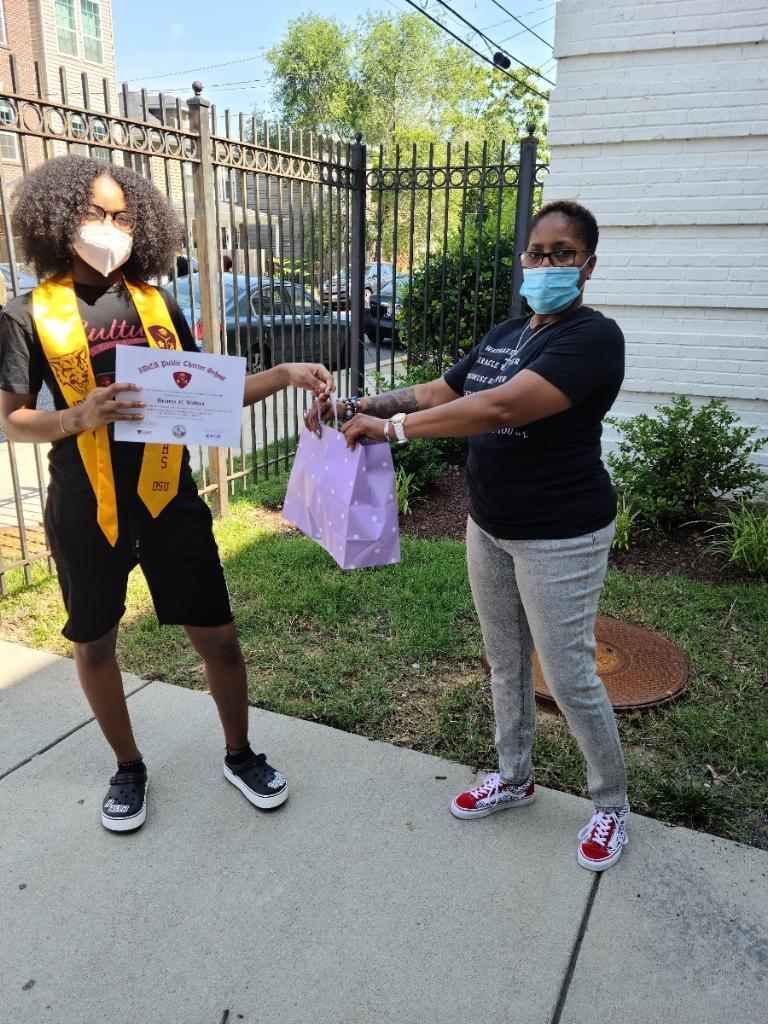 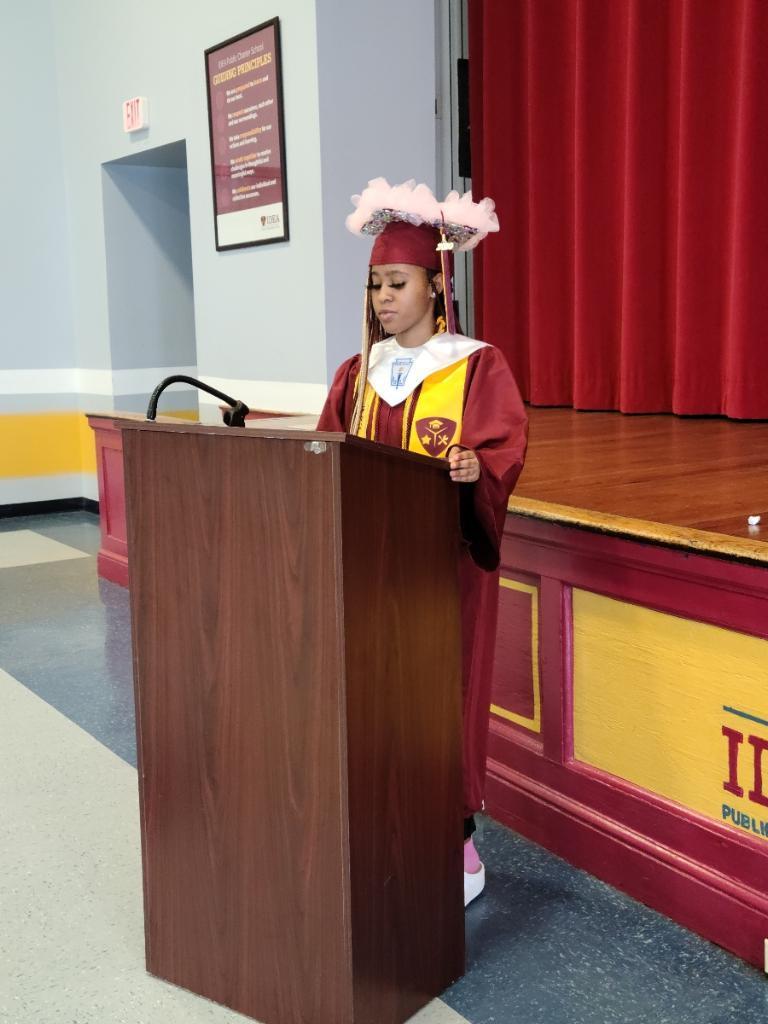 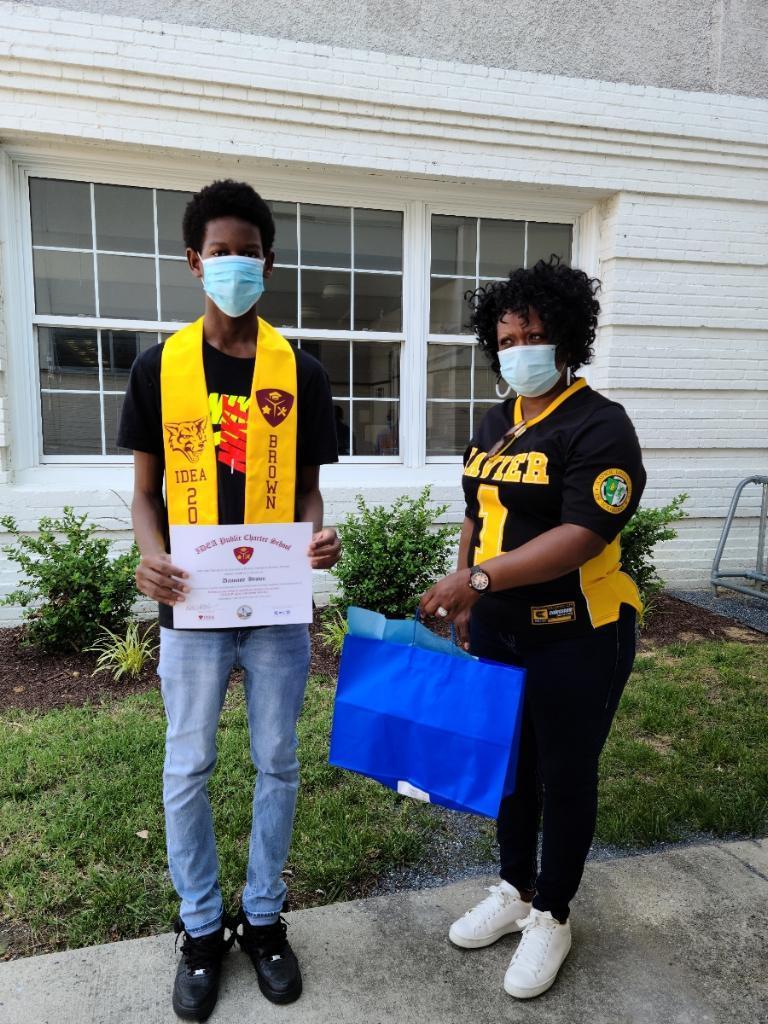 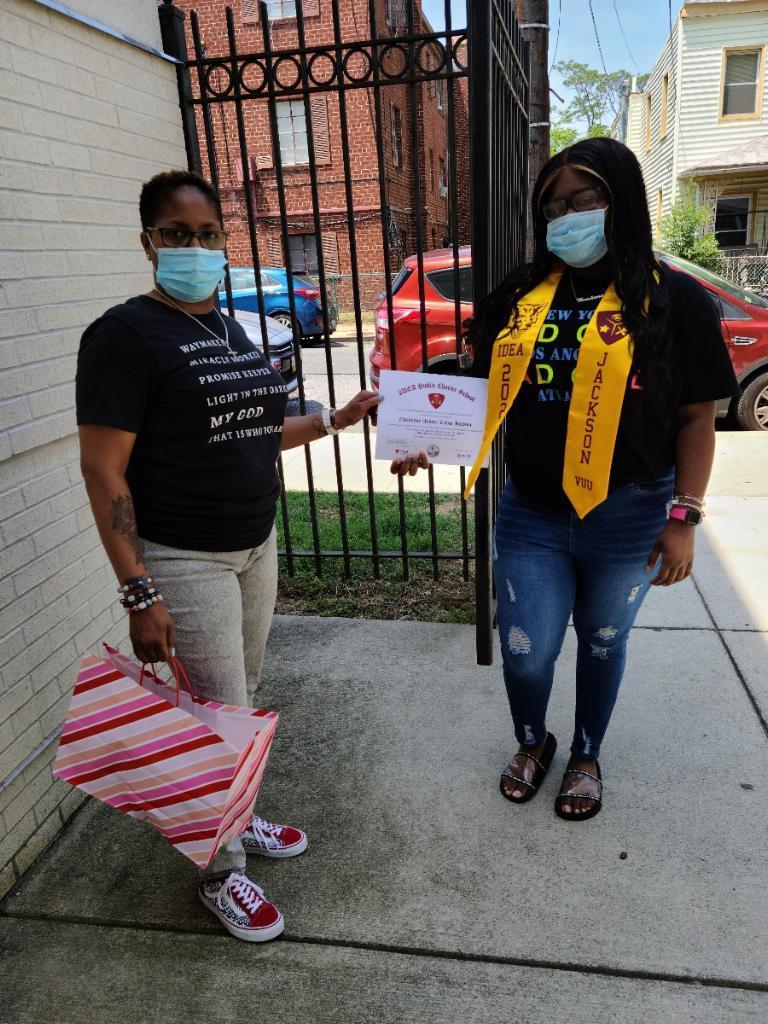 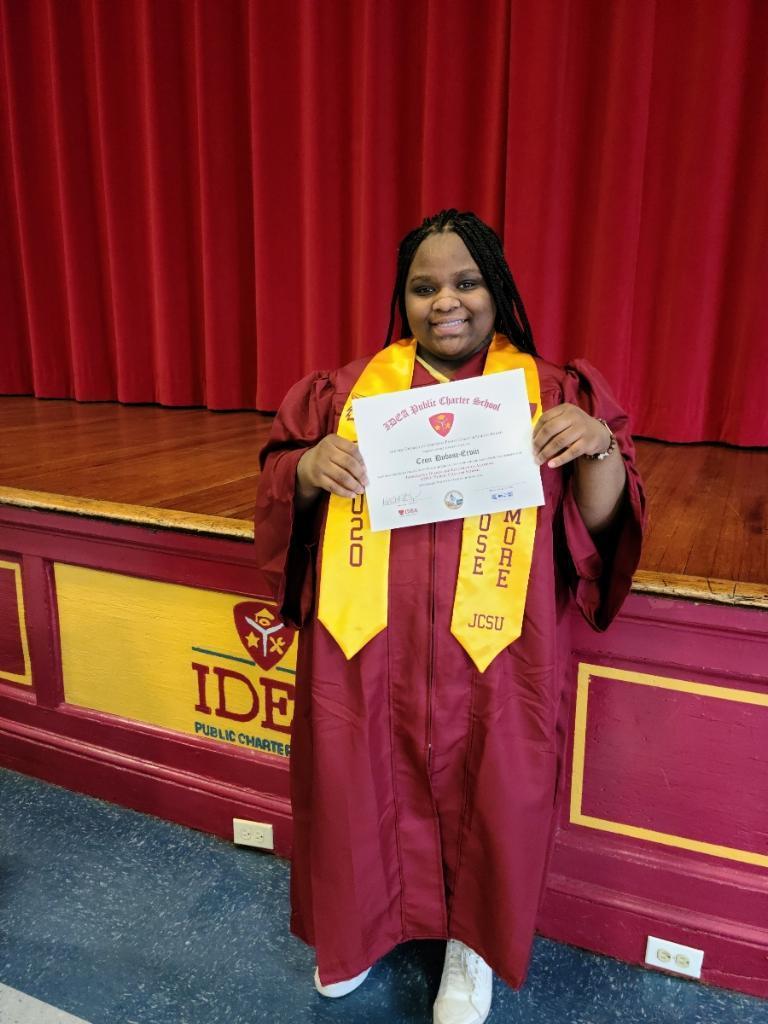 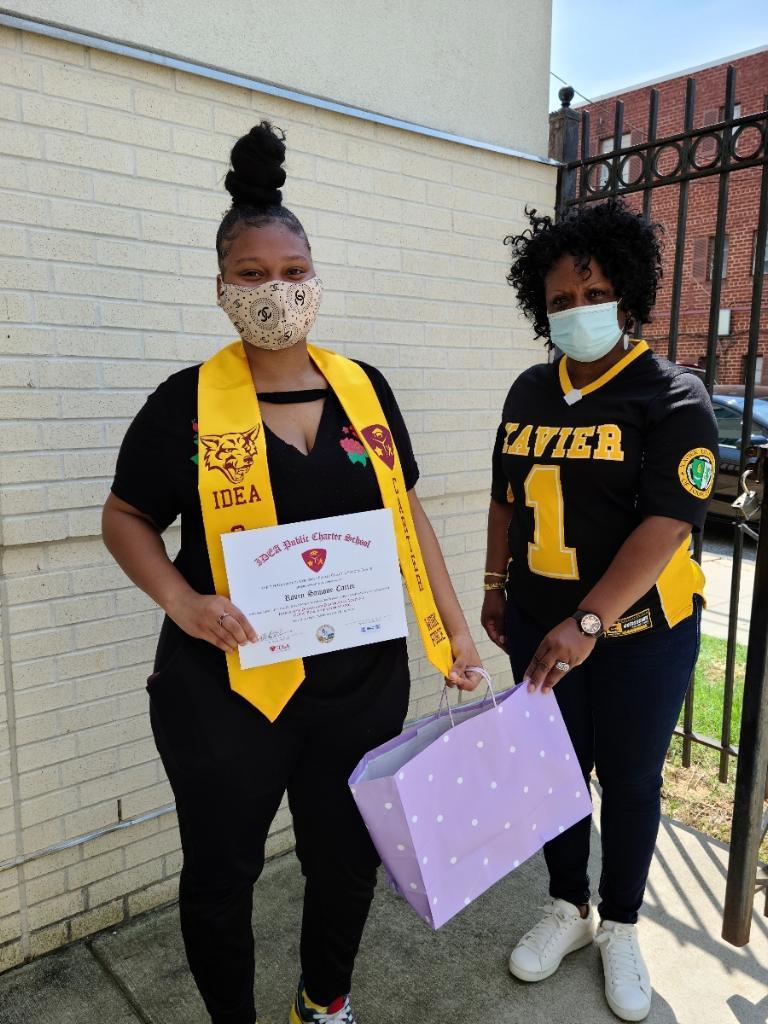