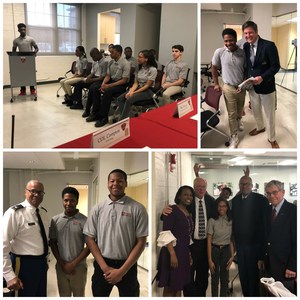 Local active duty and retired members of the US Army, including one of IDEA's founders, were on hand to support cadets during the mock inspection.

This week JROTC cadets participated in a mock inspection to prepare them for the official JROTC Program Accreditation (JPA) inspection slated for April 20. IDEA's JROTC program falls under Fourth Brigade JROTC Headquarters based in Fort Bragg, North Carolina. JROTC units are inspected every three years by a team from the Fourth Brigade that conducts a review of cadet and instructor performance, with an emphasis on continuous improvement. JPA inspection includes evaluation of Cadet Portfolios, Drill and Ceremony (Marching), Color Guard, Continuous Improvement Plan Briefing, Service Learning Briefing, and both Instructors' Portfolios.

JROTC units can earn up to 100 points in the inspection. "Our goal is to score 95 to 100," explained 1SGT Useeth Davis, who leads IDEA's JROTC program, "which would give our JROTC program the score of Honor Unit with Distinction."

During the mock inspection, cadet staff presented their continuous improvement plan, which included increasing cadet uniform participation by 10% and increasing athletic performance on fitness tests by 10%, both by the end of the school year. The cadets who led the Continuous Improvement Plan Briefing were

The cadets also gave a briefing about their community service project—a schoolwide anti-bullying rally they organized last fall. Cadets who led the Service Learning Briefing were

To support the cadets as they practiced for the formal JPA inspection, Col. Martin Compton and CSM Arthur Hayes of the Director of Army Instructors, DC; Lt. Col. Bill Dexter (ret.), one of IDEA’s founders; and Col. Dave Johnson, a member of IDEA’s board of trustees, were present.