Congratulations to October Scholars of the Month! 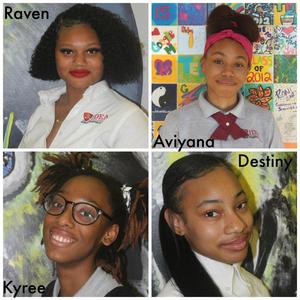 Raven Carter, Aviyana Green, Kyree Bass, and Destiny Cole were recognized by their teachers.
12th Grade | Raven Carter
Raven Carter is so well respected by all those who know her that she was the clear and unanimous choice for October’s Scholar of the Month. Though it has been true since her ninth-grade year, this October Raven’s efforts to make herself, her school, and her community a better place were especially evident. Though she is currently earning all A’s and B’s, it is more impressive the way she encourages and supports her peers to push themselves academically as well. She has taken her interest in Academy of Construction and Design classes to a new level by participating in Studio DC, an architectural landscape program for high school students through Design Virtue and the National Building Museum, as she is passionately pursuing her career interest in construction design. Raven is authentically interested in and concerned about her community, which is appreciated by all those who find themselves within Raven’s engaged and positive orbit.
11th Grade | Aviyana Green
Aviyana Green has been unanimously chosen as the October scholar of the month. Avi is the scholarly embodiment of IDEA's Five Guiding Principles. She is prepared to do her best each and every day, as demonstrated by her 3.99 cumulative GPA, putting her at the top of her class. Through every interaction, she treats her peers and environment with the highest levels of respect. By attending office hours, asking questions, and constantly staying on top of her academic obligations, Avi takes complete responsibility for her actions and learning. She is a reliable friend to her peers and is always willing to work together to assist anyone in any situation. Avi recognizes that her success as an individual contributes to and is supported by the collective success of the IDEA community at large. Congratulations to Aviyana Green for being selected as the scholar of the month!
10th Grade | Kyree Bass

Kyree Bass is a hard-working, expressive, and creative student who embodies the IDEA's Five Guiding Principles and our school's mission. Kyree was selected to represent IDEA PCS this May in the three-day Hugh O'Brien Youth Leadership  program held at the George Washington University. She is always celebrating others and continually keeps a positive attitude!

9th Grade | Destiny Cole
Destiny Cole is a bright young lady who had no hesitations about sharing her academic aspirations of being a straight A student in high school. She is a true student athlete who is a strong volleyball player and fully understands the concept of being a team player. She takes initiative to be an leader in the classroom by either helping her peers or assisting her teachers. Destiny is not only a star student because of her intellectual ability and drive but also the nature of her character.
Published November 12, 2019 Print