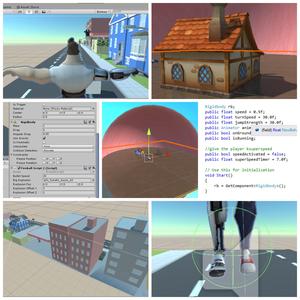 From a club to a class to a camp to a full program, video game design and coding is expanding to serve more scholars, thanks to our partner TAG Labs.

“Last year most of my students made a fully programmed and developed video game,” explained instructor Che Rose. “That’s more than enough to get them into a major computer science program when they’re applying to college. Object-oriented programming is a lot for high school students to do. What they did was a huge accomplishment.”

This fall, many of those scholars will continue their coding education in Rose’s advanced game design and coding class. “There’s so much more to learn,” he said. “This class will focus on more complex codes and comprehension.”

Rose will still teach a section of the beginner class as well as running the Wednesday gaming club, which includes some designing and some playing.

This summer, with support from a grant from Apple, TAG Labs is running a two-week coding boot camp at IDEA where scholars will learn the Apple programming language Swift. The goal of the camp will be for students to collaborate to build an app using Swift to submit to an Apple app competition. Rising sophomore Zaria Etheridge, who took Rose’s class last year, is interning with TAG Labs this summer and will help run the boot camp.

Another IDEA scholar who took Rose’s class, rising senior Devin Brewer, is working as a TAG Labs intern, helping teach younger kids to code at other summer camps that TAG Labs is operating.

“The most important thing to understand is that I’m teaching kids how to code,” said Rose. “They’re learning to make games, but they’re learning C#, C++, and Swift, which are universal coding languages that can help you get all kinds of jobs. With a decent computer science portfolio, you’ll get into college.”